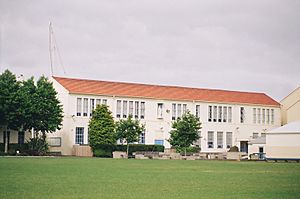 St Peter's College, Auckland is a Catholic secondary school for boys in central Auckland, New Zealand. The school is the largest Catholic secondary school in New Zealand. It was established in 1939 by the Christian Brothers, but from 2008 is entirely lay-staffed. The school has a multi-ethnic roll of 1200 (for example, 50% are pākehā (i.e. New Zealand-born non-Māori); 20% are Asian; and 20% Polynesian). Academically, the school offers for senior years (i.e. years 11 to 13) the National Certificate of Educational Achievement assessment system (NCEA) and the Cambridge International Examinations (CIE). The school enrols approximately 70 international students. Prominent graduates include: Sir Michael Gerard Fay (b. 1949), merchant banker, chair of the campaigns for three New Zealand challenges for the America's Cup in 1987, 1988 and 1992; and Sam Hunt (b. 1946), who is a well-known poet.

All content from Kiddle encyclopedia articles (including the article images and facts) can be freely used under Attribution-ShareAlike license, unless stated otherwise. Cite this article:
St Peter's College, Auckland Facts for Kids. Kiddle Encyclopedia.