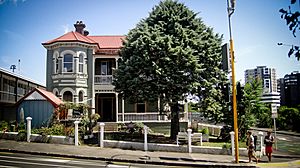 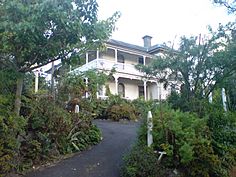 One of the many historic houses in Grafton. 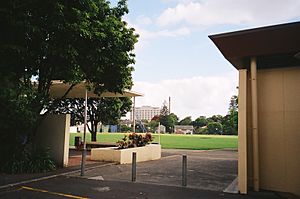 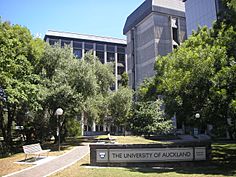 The Medical School of Auckland University and two large hospitals bound the north side.

Grafton is a suburb of Auckland City, New Zealand. The suburb is named for the Duke of Grafton, a patron of the first Governor of New Zealand, William Hobson, and the grandfather of a subsequent Governor, Robert FitzRoy. Once known as 'Grafton Heights', denoting its history as a well-off suburb in Auckland's earliest decades. According to the 2001 census, Grafton has a population of 2,052.

The suburb is characterised by its many historic buildings, many of them essentially unchanged from the early decades of the 20th century. While the extents of the suburb have shrunk with the motorway and arterial road construction of the middle 20th century, the remaining smaller suburb thus has a highly cohesive structure, which is recognised, for example, in the residential zoning which discourages demolition of existing buildings.

Grafton has a local resident's association, abbreviated as the GRA.

All content from Kiddle encyclopedia articles (including the article images and facts) can be freely used under Attribution-ShareAlike license, unless stated otherwise. Cite this article:
Grafton, New Zealand Facts for Kids. Kiddle Encyclopedia.