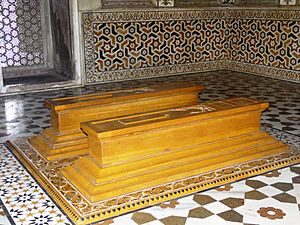 Cenotaphs at the Tomb of I'timād-ud-Daulah, Agra 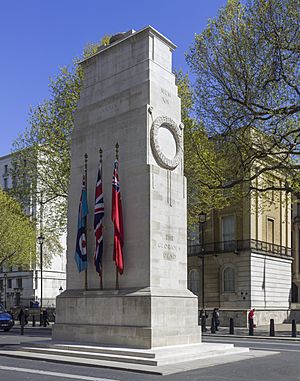 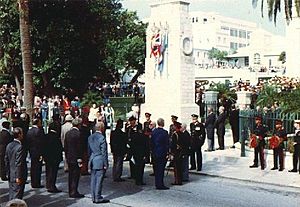 Remembrance Day parade, at the Cenotaph, in the City of Hamilton, Bermuda 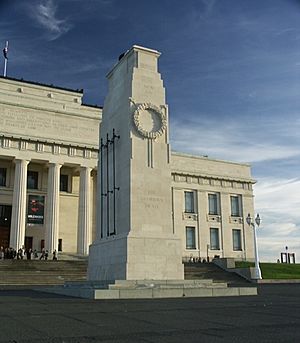 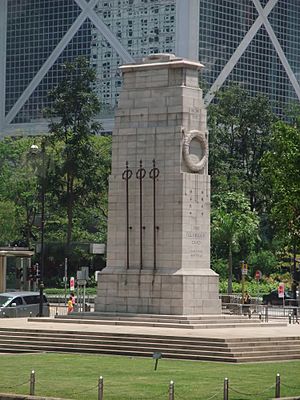 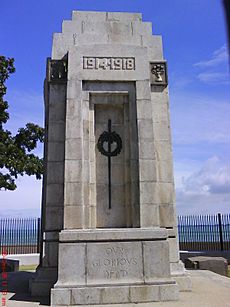 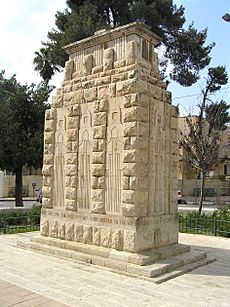 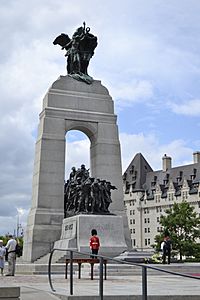 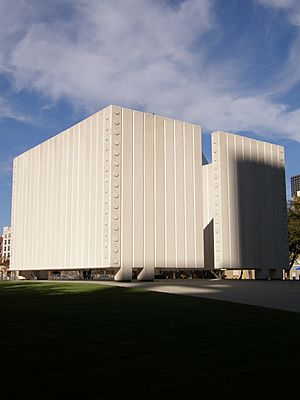 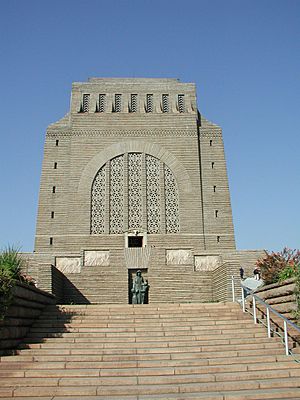 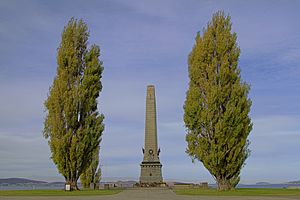 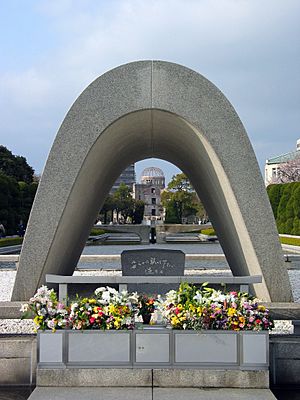 A cenotaph is an empty tomb or a monument erected in honour of a person or group of people whose remains are elsewhere. It can also be the initial tomb for a person who has since been reinterred elsewhere. Although the vast majority of cenotaphs honour individuals, many noted cenotaphs are instead dedicated to the memories of groups of individuals, such as the lost soldiers of a country or of an empire.

Cenotaphs were common in the ancient world with many built in Ancient Egypt, Ancient Greece and across Northern Europe (in the shape of Neolithic barrows).

Sir Edwin Lutyens' cenotaph in Whitehall, London influenced the design of many other war memorials in Britain and the British sectors of the Western Front, as well as those in other Commonwealth nations.

The Basilica di Santa Croce in Florence, Italy, contains a number of cenotaphs including one for Dante Alighieri, who is buried in Ravenna.

A cenotaph is the focal point of the Voortrekker Monument in Pretoria, South Africa. It is situated below the other main point of interest, a marble Historical Frieze in the Hall of Heroes, and is visible through a round opening in the floor. The Hall of Heroes itself has a dome from the summit of which one can view the interior of the monument. At noon on 16 December each year the sun shines through another opening in the dome onto the middle of the cenotaph, where the words Ons vir Jou, Suid-Afrika (from Die Stem van Suid-Afrika; Afrikaans for "We for Thee, South Africa") are inscribed. The ray of sunshine symbolises God's blessing on the lives and endeavours of the Voortrekkers. 16 December is the date in 1838 that the Battle of Blood River was fought.

Durban, South Africa, has a striking and unusual cenotaph made of granite and lavishly decorated with brightly coloured ceramics.

Port Elizabeth, South Africa, has a cenotaph. Located on the edge of St George's Park in Rink Street, it was designed by Elizabeth Gardner to commemorate the men who died in the First World War (1914 - 1918) and was erected by the monumental mason firm of Pennachini Bros. On either side of the central sarcophagus are statues by Technical College Art School principal, James Gardner, who served in the trenches during the war. One depicts St George and the Dragon, the other depicts the sanctity of family life. Surrounding the sarcophagus are a number of bas-relief panels depicting scenes and people during the First World War. It was unveiled by Mrs W F Savage and dedicated by Canon Mayo on 10 November 1929. A surrounding memorial wall commemorates the men and women killed during World War II.

In Livingstone there is a cenotaph at the Eastern Cataract of The Victoria Falls with the names of the men of Northern Rhodesia who died during the Great War 1914–18. It was unveiled by HRH Prince Arthur of Connaught on 1 August 1923.

There is also a cenotaph in Lusaka at Embassy Park, opposite the Cabinet Office along Independence Avenue, and commemorates those Zambians who fought and died in World Wars I & II. The cenotaph was commemorated in 1977.

A monument which has come to be known to as the "Cenotaph" was erected in Plaza San Martín, in downtown Buenos Aires, to commemorate the Argentinian soldiers who died during the Falklands War, in 1982. The monument consists of a series of plaques of black marble with the names of the fallen, surrounding a flame, and during the day is guarded by two soldiers.

Another cenotaph, which is a replica of the Argentine Military Cemetery in Darwin on the Falkland Islands, exists in Campo de Mayo, a large Army facility and training field just outside Buenos Aires.

A limestone replica of the Cenotaph at Whitehall in London was erected outside the Cabinet Building in Hamilton, Bermuda in 1920.

In Canada, , major cenotaphs commemorating the nation's war dead in World War I and later conflicts include the National War Memorial (a cenotaph surmounted by a bronze sculpture entitled "The Response") in Ottawa; Montreal, Toronto, Hamilton, Victoria, St. John's, Halifax, and the Victory Square Cenotaph, in Vancouver, British Columbia.

In the United States, a cenotaph in Yale University's Hewitt Quad (or Beinecke Plaza) honours men of Yale who died in battle. The John Fitzgerald Kennedy Memorial in Dallas is often described as a cenotaph.

The Battle Monument in Baltimore, Maryland commemorates the Battle of Baltimore, the Battle of North Point on 12 September 1814, the Bombardment of Fort McHenry on 13–14 September, and the stand-off on Loudenschlager's Hill (now Hampstead Hill in Patterson Park). It has an Egyptian Revival cenotaph base, surmounted by a fasces bound together with ribbons bearing the names of the dead. It was designed by French émigré architect Maximilian Godefroy in 1815, and construction was completed in 1827. It is considered the first war memorial in America, and an early example of a memorial to individual soldiers. The Monument appears on the Seal and the Logo of the City of Baltimore, and serves as a symbol for any agencies of the municipal government.

A cenotaph for the defenders of the Battle of the Alamo (March 1836) stands in front of the Alamo mission chapel in San Antonio, Texas. The cenotaph is empty because the remains of the fallen were cremated.

The concrete Memorial Cenotaph at the Hiroshima Peace Memorial Park was designed by Kenzo Tange to commemorate the 200,000 victims of the August 1945 atomic bomb attack.

A cenotaph was erected inside the Manila North Cemetery in the Philippines in honour of the 24 Scouts who died in a plane crash en route to the 11th World Scout Jamboree.

The cenotaph at the 228 Peace Memorial Park in Taipei, Taiwan were erected as memorials to the February 28 Incident.

A cenotaph in the UK that stands in Whitehall, London, was designed by Sir Edwin Lutyens and replaced Lutyens' identical wood-and-plaster cenotaph erected in 1919 for the Allied Victory Parade, and is a Grade I listed building. It is undecorated save for a carved wreath on each end and the words "The Glorious Dead," chosen by Lloyd George. It was intended to commemorate specifically the victims of the First World War, but is used to commemorate all of the dead in all wars in which British servicemen and women have fought. The dates of the First World War and the Second World War are inscribed on it in Roman numerals. The design was used in the construction of many other war memorials throughout the British Empire.

There is another Cenotaph that stands on Victoria Square in Aberdare Glamorgan.

The Cenotaph in Belfast, Northern Ireland, is located in the grounds of Belfast City Hall and is set within a Garden of Remembrance. It is about 9.5 metres (31 ft) high and presents several carvings including laurel wreaths, symbolising victory and honour. The Cenotaph is the site of the annual Northern Ireland memorial held on Remembrance Sunday, the closest Sunday to 11 November (Armistice Day).

Ottoman-ruled Jerusalem surrendered to the British Egyptian Expeditionary Force under General Edmund Allenby during the Battle of Jerusalem in December 1917 during World War I. A cenotaph was erected in 1920 at the historical site of the surrender, later to be named Allenby Square. The inscription dedicates it to the fallen of the 60th London Division.

Cenotaphs for the missing

Although most notable cenotaphs commemorate notable individuals buried elsewhere, many cenotaphs pay tribute to people whose remains have never been located, particularly those lost at sea. Some such cenotaphs are dedicated to victims of the RMS Titanic, whose bodies were not recovered after the sinking. Although Isidor Straus's body was recovered, Ida Straus's body was not, and a cenotaph at the Straus Mausoleum at Woodlawn Cemetery in the Bronx is dedicated to Isidor and Ida together. Its inscription reads: "Many waters cannot quench love - neither can the floods drown it." (Song of Solomon 8:7) The striking cenotaph of Major Archibald Butt, aide to U.S. President William Taft, is located at Arlington National Cemetery.

In Inishmore, Aran Islands, Ireland, drowning was formerly such a common cause of death for island fishermen that each family had a memorial to those lost at sea. Known as leachtaí cuimhneacháin (memorial cairns). Most were erected in the 19th century, although some date back to the eighteenth. A modern memorial was erected in 1997. 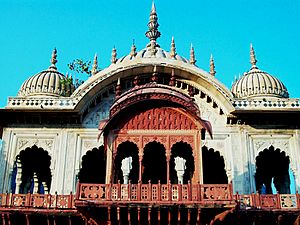 In India, cenotaphs are a basic element of Hindu architecture, later used by Moghuls as seen in most of the mausoleums of Mughal Emperors which have two burial chambers, the upper one with a cenotaph, as in Humayun's Tomb, Delhi, or the Taj Mahal, Agra, while the real tomb often lies exactly below it, or further removed. The Chhatri(s) trace their origin at 2000 years ago at Fort Kangara. The term chhatri, used for these canopylike structures, comes from Hindustani word literally meaning umbrella, and are found throughout the northwestern region of Rajasthan as well as in Madhya Pradesh and Maharashtra. In the Shekhawati region of Rajasthan, chhatris are built on the cremation sites of wealthy or distinguished individuals. Chhatris in Shekhawati may consist of a simple structure of one dome raised by four pillars to a building containing many domes and a basement with several rooms. In some places, the interior of the chhatri is painted in the same manner as the Haveli.

Cenotaphs have also been the subject of a number of illustrations including:

In the Internet age, virtual cenotaphs are common in the game World of Warcraft. They have also been created in the augmented reality game Ingress in honour of the slain MIT police officer Sean Collier and in memory of the victims of the 1942 Struma disaster.

On 13 January 2016, Belgian amateur astronomers at MIRA Public Observatory dedicated, in conjunction with radio station Studio Brussels, an asterism of seven stars in the vicinity of Mars which had been photographed at the exact time of David Bowie's death; when appropriately connected they form the iconic lightning bolt of Aladdin Sane.

All content from Kiddle encyclopedia articles (including the article images and facts) can be freely used under Attribution-ShareAlike license, unless stated otherwise. Cite this article:
Cenotaph Facts for Kids. Kiddle Encyclopedia.