This page is about Starship Children's Health. For other similarly named hospitals, see Children's Hospital (disambiguation).

Starship Children's Health treats over 86,000 patients a year (2005/2006 financial year), around a quarter of them inpatients. Starship is also a major medical teaching centre, leading New Zealand in paediatric training and research. The hospital received the 2005 New Zealand Health Innovations Awards for its medication safety programs. 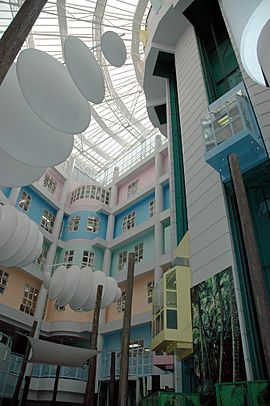 Main Starship building atrium looking up from the inner courtyard. 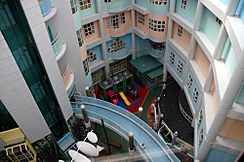 The main Starship building opened on 18 November 1991 on the grounds of Auckland City Hospital. Its name was chosen to appeal to children and young people and to reflect the building's design. The building has a central atrium lit by natural light and designed to a rainforest theme with a playground. Each of its five levels is painted a different colour, with a symbolic meaning: aqua for the Pacific Ocean; orange for land; blue for sky; yellow for sunshine; and pink for health.

Facilities include inpatient and outpatient services as well as community-based services such as Community Child Health and Disability Service, Safekids and Paediatric Home Care. The building has nine wards and a capacity of 219 beds. Besides the main building, Starship has outpatient clinics for the Auckland region in Tamaki, West Auckland and North Shore, as well as being associated with approximately 45 Outreach Clinics throughout the country.

The volunteer group Radio Lollipop operate a hospital radio station, as well as visiting children with games and entertainment in the evenings. The hospital includes a number of food outlets and a convenience store. Previously, it also had a McDonald's franchise, but this was closed in 2005 after eight years of operation, with the company citing a very marginal operation as the main reason. Some anti-obesity campaigners had also considered the fast-food restaurant as providing a wrong message, though the franchise noted that it had extended its menu beyond its normal selection to include such choices as cereal.

All content from Kiddle encyclopedia articles (including the article images and facts) can be freely used under Attribution-ShareAlike license, unless stated otherwise. Cite this article:
Starship Hospital Facts for Kids. Kiddle Encyclopedia.