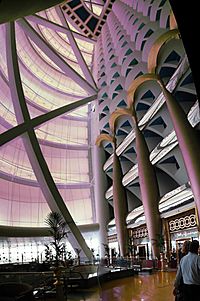 In architecture, an atrium (plural: atria or atriums) is a large open air or skylight covered space surrounded by a building. Atria were a common feature in Ancient Roman dwellings, providing light and ventilation to the interior. Modern atria, as developed in the late 19th and 20th centuries, are often several stories high and having a glazed roof or large windows, and often located immediately beyond the main entrance doors (in the lobby).

Atria are a popular design feature because they give their buildings a "feeling of space and light." The atrium has become a key feature of many buildings in recent years. Atria are popular with building users, building designers and building developers. Users like atria because they create a dynamic and stimulating interior that provides shelter from the external environment while maintaining a visual link with that environment. Designers enjoy the opportunity to create new types of spaces in buildings, and developers see atria as prestigious amenities that can increase commercial value and appeal. 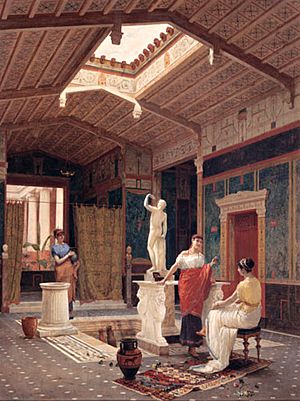 In a domus, a large house in ancient Roman architecture, the atrium was the open central court with enclosed rooms on all sides. In the middle of the atrium was the impluvium, a shallow pool sunken into the floor to catch rainwater from the roof. Some surviving examples are beautifully decorated. The opening in the ceiling above the pool (compluvium) called for some means of support for the roof, and it is here where one differentiates between five different styles of atrium. As the centrepiece of the house, the atrium was the most lavishly-furnished room. Wealthier houses often included a marble cartibulum, an oblong marble table supported by trapezophoros pedestals depicting mythological creatures like winged griffins. Also, it contained the little chapel to the ancestral spirits (lararium), the household safe (arca) and sometimes a bust of the master of the house.

The term was also used for a variety of spaces in public and religious buildings, mostly forms of arcaded courtyards, larger versions of the domestic spaces. Byzantine churches were often entered through such a space (as are many mosques, though the term atrium is not usually used to describe Islamic architecture).

The 19th century brought the industrial revolution with great advances in iron and glass manufacturing techniques. Courtyards could then have horizontal glazing overhead, eliminating some of the weather elements from the space and giving birth to the modern atrium.

Fire control is an important aspect of contemporary atrium design due to criticism that poorly designed atria could allow fire to spread to a building's upper stories more quickly. Another downside to incorporating an atrium is that it typically creates unused vertical space which could otherwise be occupied by additional floors.

One of the main public spaces at Federation Square, in Melbourne, Australia, is called The Atrium and is a street-like space, five stories high with glazed walls and roof. The structure and glazing pattern follow the system of fractals used to arrange the panels on the rest of the facades at Federation Square.

In Nashville, Tennessee, U.S., the Opryland Hotel hosts 4 different large atria, spanning 9 acres (36,000 m2) of glass ceiling in total, in the hotel above the gardens of: Delta, Cascades, Garden-Conservatories, and Magnolia.

All content from Kiddle encyclopedia articles (including the article images and facts) can be freely used under Attribution-ShareAlike license, unless stated otherwise. Cite this article:
Atrium (architecture) Facts for Kids. Kiddle Encyclopedia.