The Jin Mao Tower is an 88-story (93 if counting the floors in the spire) landmark skyscraper in Lujiazui, Pudong, Shanghai, China. It is 420.5 metres (1,380 feet) tall and is one of the tallest buildings in the world. It contains a shopping mall, offices and the Grand Hyatt Shanghai hotel, which at the time of completion was the highest hotel in the world. 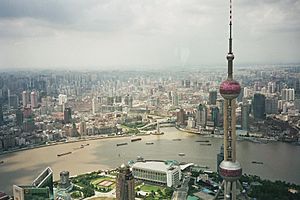 A view from the Jin Mao Tower's Skywalk

The Skywalk, a 1,520 m2 (16,400 sq ft) indoor observation deck with a capacity of 1,000+ people, occupies the 88th floor of the building. In addition to the panoramic views of Shanghai, it offers a topside view of the hotel atrium below.

It also includes a small post office. Access is through two express elevators from the basement that travel at 9.1 m/s and take 45 seconds to reach the top.

The 3-level basement has a food court, while the first two floors include the Hyatt's conference and banquet facilities. The first six floors include a shopping mall, restaurants, and nightclubs, include Pu-J's.

All content from Kiddle encyclopedia articles (including the article images and facts) can be freely used under Attribution-ShareAlike license, unless stated otherwise. Cite this article:
Jin Mao Tower Facts for Kids. Kiddle Encyclopedia.