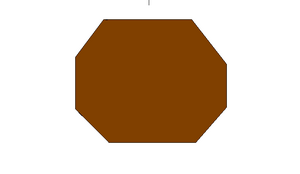 A brown octagon on a white background

In geometry, an octagon is an eight-sided polygon.

A regular octagon has Schläfli symbol {8} and can also be constructed as a quasiregular truncated square, t{4}, which alternates two types of edges. A truncated octagon, t{8} is a hexadecagon, t{16}.

Properties of the general octagon 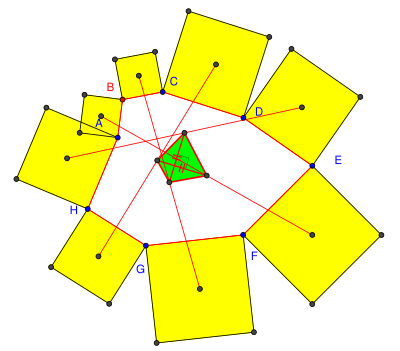 The sum of all the internal angles of any octagon is 1080°. As with all polygons, the external angles total 360°.

If squares are constructed all internally or all externally on the sides of an octagon, then the midpoints of the segments connecting the centers of opposite squares form a quadrilateral that is both equidiagonal and orthodiagonal (that is, whose diagonals are equal in length and at right angles to each other). 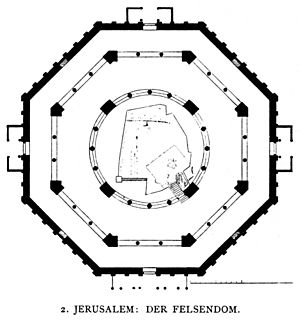 The octagonal floor plan, Dome of the Rock.

The octagonal shape is used as a design element in architecture. The Dome of the Rock has a characteristic octagonal plan. The Tower of the Winds in Athens is another example of an octagonal structure. The octagonal plan has also been in church architecture such as St. George's Cathedral, Addis Ababa, Basilica of San Vitale (in Ravenna, Italia), Castel del Monte (Apulia, Italia), Florence Baptistery, Zum Friedefürsten church (Germany) and a number of octagonal churches in Norway. The central space in the Aachen Cathedral, the Carolingian Palatine Chapel, has a regular octagonal floorplan. Uses of octagons in churches also include lesser design elements, such as the octagonal apse of Nidaros Cathedral.

All content from Kiddle encyclopedia articles (including the article images and facts) can be freely used under Attribution-ShareAlike license, unless stated otherwise. Cite this article:
Octagon Facts for Kids. Kiddle Encyclopedia.