Auckland City Hospital is a public hospital in Auckland, New Zealand. It is one of the largest hospitals in the country, as well as one of the oldest medical facilities of the country. It is a publicly funded hospital, run by the Auckland District Health Board since 2001. Located in the suburb of Grafton, east of the CBD, it has 3,500 rooms and provides a total of 1124 beds [1].

The hospital is a research and teaching facility as well, providing training for future doctors, nurses, midwives and other health professionals. Rare or complex medical conditions from all over New Zealand may get referred here. The hospital is closely associated with Starship Children's Health, a separate subsidiary facility on the same grounds, located just to the northwest of the City Hospital.

To secure the best quality possible around the clock, in 2005 there was commissioned a 3,600 kW (3.6 MW) emergency power generation system. This amount for 710 beds is a high one and the hospital can continue all work going on with that much capacity.

Our clear and direct vision is to support the people we serve to achieve the health outcomes they want for themselves, their whānau and their communities. We also look after all of the New Zealand population’s needs as the provider of specialised services, including organ transplant services, specialist paediatric services and high risk obstetrics. 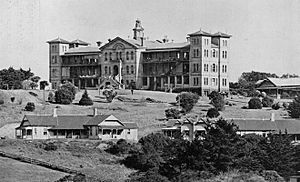 Originally, a timber hospital occupied the Auckland City Hospital site from 1846 to 1877, providing four wards of 10 beds each, and having been designed by Frederick Thatcher, the architect of the St Mary's Church in Parnell. The hospital treated both Europeans and Māori, though the diseases were different. Thomas Moore Philson was superintendent of the hospital from 1859 to 1883.

In 1877, a new building in an Italianate style was constructed for £25,000, designed by Philip Herepath, architect to the provincial government. Administered by T M Philson, the new hospital became known for taking on many charity cases but, partly in response, was also continually understaffed and overcrowded. There were also complaints about the limited training of the staff, which changed only with the hiring of a new matron, Miss Crisp, in 1883. Having trained in the new tradition of Florence Nightingale, she is credited with turning the hospital from an 'old men with alcoholism institution' into a real hospital and instituting real nurse training. 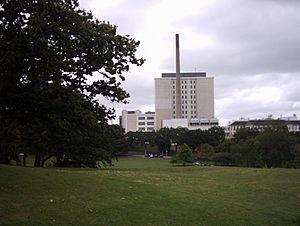 The older part of Auckland City Hospital, now the support building, as seen from the Auckland Domain. Visible in front is the smokestack of the complex's central heating.

The Herepath building was demolished in 1964 to make way for a new structure designed by architects Stephenson & Turner, which was completed in 1967, and still remains.

The hospital is situated in a NZ$180 million building which was built between 2000 and 2003. It is nine levels high (ten including plant), five levels less than the older part of the hospital, which has now become the support building. The new structure with 75,575 m2 is one of New Zealand's largest public buildings. It was designed by Jasmax in conjunction with McConnel Smith and Johnson Architects Sydney, and built by Fletcher Construction.

The following information are excerpts from the construction company's database:

The support building (old hospital) mostly contains administrative offices, clinical and housekeeping support, physio- and occupational therapy, the bone marrow transplant ward, some inpatient and outpatient services as well as teaching and research facilities. The support building is a central part of the hospital complex and is linked to the new building section by a skywalk.

All content from Kiddle encyclopedia articles (including the article images and facts) can be freely used under Attribution-ShareAlike license, unless stated otherwise. Cite this article:
Auckland City Hospital Facts for Kids. Kiddle Encyclopedia.