Onehunga is a suburb of Auckland City in New Zealand and the location of the Port of Onehunga, the city's small port on the Manukau Harbour. It is eight kilometres south of the city centre, close to the volcanic cone of Maungakiekie/One Tree Hill.

Onehunga is a residential and light-industrial suburb. According to the 2006 census, there were 7,824 residents in Onehunga. There are almost 1,000 commercial and industrial businesses in the area. Onehunga stretches south from Royal Oak to the north shore of the Manukau Harbour. To the east are the areas of Oranga and Te Papapa; to the west, Hillsborough. On the southern shore of the Manukau Harbour, and linked to Onehunga by two bridges, is the suburb of Mangere Bridge.

Onehunga is slightly unusual in that it has a substantial underground freshwater source, the Onehunga aquifer, which it owes to rainwater soaking through the lava flows around One Tree Hill. While most of drinking water of the Auckland area is drawn from reservoirs in the Hunua and Waitakere Ranges, around 5% is drawn from the Onehunga aquifer. The up to 20,000 m³ that are daily drawn from the source receive treatment in a local plant before being fed into the freshwater supply network. In contrast, while the waters of Western Springs also seep through the city's lava fields, they are no longer used as a source of drinking water.

The port area of Onehunga is now much smaller than Auckland's east coast port on the Waitemata Harbour, although in the 19th century it was the larger. The wharves are located on reclaimed land bordering a low volcanic crater called Te Hopua, once occupied by a tidal lagoon opening to the southwest, but which was also reclaimed.

Onehunga's southwestern side, near the Mangere Harbour, lost its direct waterfront access in the 1970s, when the Southwest Motorway was built there. Only a tidal lagoon remains on the city side, though in 2008, there were proposals that the motorway (which is to be widened further) could be sunk into a trench to provide direct access to the harbour again. As of 2013, a project is underway to restore the Onehunga foreshore, which will be connected to the city-side park by a pedestrian and cycle bridge over State Highway 20.

The name Onehunga is Māori and probably means "burial place", referring to the Māori burial caves in the area, probably among the lava flows issuing from One Tree Hill (Maungakiekie). Another possible meaning is "beach" or "sand" for one and "people" for hunga. Onehunga was close to one of the richest areas of the Auckland Isthmus, and saw many battles in pre-European times. In the 1830s decades before the Europeans arrived in larger numbers in the area, the area was the main Ngati Whatua settlement, who had begun to slowly move back to places north of the Manukau Harbour after the Musket Wars. 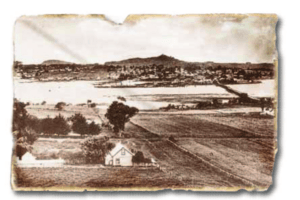 Photo of Onehunga before urbanisation. 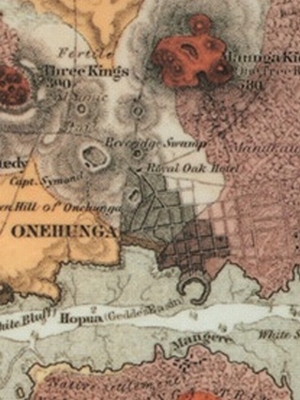 1859 map of Onehunga and nearby volcanoes.

With the arrival of the Europeans, settlement of the Manukau Harbour area was begun from and long focused on Onehunga. Raiding of enemy settlements also occurred from here as a base during the Māori Wars. This was due to the town initially having been founded as a fencible settlement by Governor Grey, i.e. where former soldiers (mostly Irish) were granted land to settle down, with the implied understanding that if the town was threatened, they would defend it. However, by the time war actually occurred, it was mostly fought with regular soldiers.

During the 19th century most shipping between New Zealand and Great Britain came to Onehunga, via South Africa and Australia. While some shipping entered the Waitemata Harbour and docked at Auckland, much of it entered the Manukau Heads and docked at Onehunga, thus saving several days sailing around North Cape. The Manukau Harbour was treacherous however (as evidenced by the sinking of the HMS Orpheus in 1863, killing 180 people) but the coastal Steamship lines carried virtually all passenger and freight trade between Auckland and Wellington via Wanganui and Onehunga.

Onehunga was also the main route to and from the south, as most shipping routes were shorter via the western coast of the North Island than around the east coast to the Waitemata Harbour. Until 1908 a steamer from Onehunga was the fastest means of travel from Auckland to Wellington, the capital of the colony (initially the sea journey went all the way, then later it connected to the New Plymouth Express instead). In 1909 a typical coastal freight connection was a steamer from Onehunga to locations like Raglan, Kawhia and Waitara,

By the First World War Onehunga was no longer an important commercial port, this was partly because of a general increase in the size of ships, which meant the Waitemata Harbour was favoured especially as it was wider and deeper. More significant however was the completion of the North Island Main Railway in 1908 - this effectively made the coastal passenger and freight steamship trade on both coasts of the country largely unprofitable. The port does still serve coastal traders and some local fishing, there is also a Cement and sand company which maintains facilities at Onehunga.

In 1874 the town of Onehunga had 2,044 inhabitants, compared with Wellington's 10,547, reflecting the importance of the smaller port towns during an age when New Zealand was booming, but internal transport links were still rudimentary. In 1876, Onehunga was declared a borough with a mayor and 16 councillors.

From 1885 on, the town became known for its wool industry (several firms maintained factories here including one which produced blankets), this weaving industry saved the area from more serious decline when the shipping trade reduced after 1908. As the centre of the Auckland isthmus became covered by suburban developments the Onehunga foreshore had been an attraction for families from Mount Eden, Epsom and One Tree Hill. The beach at Onehunga became quite popular after the electric tram route was completed in 1906 and the Tea Rooms situated at the Tram Terminus, overlooking the harbor an attraction in their own right.

After the Municipal Abattoir was relocated from Freeman's Bay to Westfield and Southdown, Onehunga started to suffer from the toxic discharges the freezing works pumped into the harbour. This effectively put an end to Onehunga's emerging role as a seaside resort and also made it a less attractive place to live. By the late 1930s the water quality of the harbour was quite poor, with a discernible downturn in fish and wildlife numbers. It became unsafe to eat any shellfish for example and fish numbers dwindled. The installation of a large Sewerage Treatment Plant in the harbor in the 1960s only made things worse. Since the decommissioning of the Freezing Works at Westfield & Southdown and a massive redesign of the Manukau Sewerage Treatment Works the quality of the water has increased significantly.

In 1893 Elizabeth Yates became mayor of Onehunga. While she was defeated at the polls only one year later, she was the first woman in the British Empire to hold such a post.

While in 1891 Onehunga was one of the "25 most populous urban areas/towns of New Zealand", with about 5,000 inhabitants, by the First World War it had ceased to be a port of importance. It gained a new role as a shopping and service centre as it was engulfed by the suburban development of Auckland, and was amalgamated with Auckland City in 1989.

Onehunga had for a short time Auckland's first zoo. However, the zoological garden that John James Boyd created near today's Royal Oak did not meet with local approval - mainly due to concerns about the smells and crowds. Eleven years after its November 1911 opening, the animals were bought and transferred to the new Auckland Zoo at Western Springs.

Although the area was a predominantly working-class suburb for much of the 20th century, it has undergone some gentrification since the 1990s. In recent times, many of the bungalows of the 1920s (along with the earlier villas) have undergone restoration and Dress Smart has reinvigorated commerce in the area. Secondary schools located conveniently are Onehunga High School, One Tree Hill College and Marcellin College. Some boys also attend St Peter's College.

The hit TV show Back Of The Y was filmed in 'Auckland's beautiful Onehunga'. 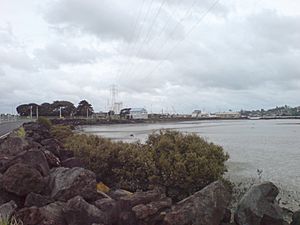 Onehunga's shore is heavily modified by human use. The old volcanic basin that used to link to the Manukau Harbour was filled in, with shorelines reclaimed and straightened for human use (Port of Onehunga, industrial uses and sports fields). The New Zealand State Highway 20 extension further disrupted Onehunga's connection to the shore in the 1970s.

This loss of amenity and space was one of the major complaints of local groups during negotiations over further motorway widening connected to the Mangere Bridge duplication. Proponents of a restored beach eventually won a $18 million commitment from Transit New Zealand (now NZ Transport Agency), which was topped up by a further $10 million from Auckland City Council. The sum is to fund a large-scale new shoreline west of the motorway, connected to downtown Onehunga with new pedestrian/cyclebridges, and creating 11ha of new beach and headland landscape. Three designs out of seven initial competitors have been shortlisted for further work as of late 2009, and it is hoped to complete the restoration of the foreshore by mid-2014.

In mid-2011, the plans for the restoration works were clarified further, and provided for public comment, setting out a 6.4 hectare reclamation area with sanded beaches, new green open space and several new headlands. The area is to receive a new boat ramp, and walk and cycleways including a new walking and cycling bridge over the motorway to Onehunga. Construction has started on 19 November 2012.

The newly-named Taumanu Reserve was officially opened to the public on 14 November 2015, in an event attended by over a thousand people

Onehunga Line rail services carry passengers between Onehunga Train Station and central Auckland's Britomart Transport Centre via the main line junction at Penrose Train Station. The Campaign for Better Transport campaigned to have the line extended south from Onehunga across the SH20 Manukau Harbour second crossing bridge to Auckland International Airport. Former Auckland Mayor Len Brown also campaigned for this Auckland Airport Line, though it will likely only be developed after the City Rail Link is completed.

Electric services began running between Britomart and Onehunga on 28 April 2014.

Queen St, named after Queen Victoria, led onto the 1920s Mangere Bridge and thence to the suburb of the same name. This was one of the main land routes south out of Auckland and the usual route to the airport until the motorway and regional road system in the 1970s diverted the through traffic away from the Onehunga and Mangere Bridge.

In 1973, Queen St was closed to through traffic, and on 2 April 1973 was renamed Onehunga Mall and reopened as a pedestrian shopping precinct. In 1996, Onehunga Mall was reopened to traffic.

Until 1956, a tram line ran all the way from the Auckland CBD to Onehunga. 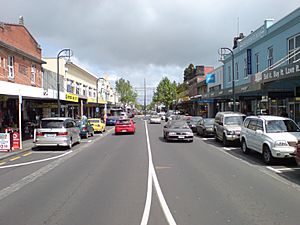 Onehunga Mall, the main street of the Onehunga town centre. 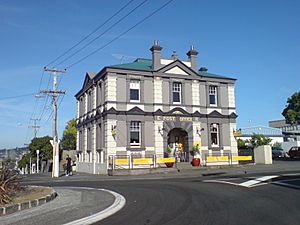 Also in Jellicoe Park is a collection of buildings illustrating the early history of the area:

Across Grey Street from the park is

Nearby in Selwyn Street is

In Alfred Street is

All content from Kiddle encyclopedia articles (including the article images and facts) can be freely used under Attribution-ShareAlike license, unless stated otherwise. Cite this article:
Onehunga Facts for Kids. Kiddle Encyclopedia.