Royal Oak is a small suburb in New Zealand's largest city of Auckland. It is situated between the suburbs of Epsom (north) and Onehunga (south).

Royal Oak is under the local governance of the Auckland Council.

It is named after the Royal Oak hotel that was located on the Royal Oak Roundabout. In 1909 the hotel lost its licence to sell alcohol. For many years it was a pharmacy before being used as the premises of Barfoot & Thompson Real Estate Agency. Royal Oak refers to the tree Charles II hid up during the Battle of Worcester to avoid capture.

In the middle of the Royal Oak Roundabout was once located the Seddon Memorial. Designed by John Park, a local architect who was also Mayor of Onehunga at one time, the structure was erected in memory of Prime Minister Seddon who died suddenly in office in 1906. Richard John Seddon (1845 - 1906) was immensely popular and there are several monuments to him around the country. The Royal Oak Monument was in the form of a Gothic Market Cross and was a combined tram shelter, gas lamp standard and drinking fountain.

By the middle of the 20th century it was decided that the memorial was an obstruction to traffic and it was removed during September and October 1947. The Royal Oak roundabout served six converging roads but one has been closed off in recent years.

Royal Oak Mall was expanded significantly in the 1980s to become a significant source of commerce in the area. 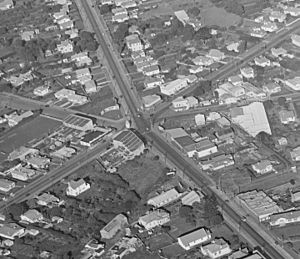 An aerial view of the Royal Oak intersection taken in May 1947. The Seddon Memorial is visible in the centre.

Royal Oak was once home to Boyd Zoo, one of the earliest Zoological Garden in New Zealand. It was opened in 1912 by local businessman (and future mayor of Onehunga) John James Boyd. It held 600 to 2000 specimens including several lions, bears, wolves, flamingos, and other exotic animals. Most of the animals were kept in relatively poor conditions. There was an abattoir on site where local stray animals such as horses and cats were slaughtered to be fed to the captive animals.

There is an often repeated tale of a lion escaping from the zoo and wandering around the streets of Onehunga, however this story is somewhat erroneous and misleading. The first appearance of the story was in a community newspaper in 1966. The most probable origin of the story was a lion cub which had gotten into a paddock of cows with calves around the Christmas of 1917. Rather than a wild lion roaming the streets, the small cub was backed into a corner of the paddock by the herd until it was lassoed and returned to its enclosure.

Although the zoo was popular with visitors, the noise and smell made it very unpopular with the locals. Boyd was engaged in a constant battle with the local council over the running of the zoo. Eventually, after several attempts to sell his animals to the council, the council finally reached an agreement with Boyd: 11 lions, 6 bears, and 2 wolves were sold to the council for £800. The animals were given to the newly established Auckland Zoo at Western Springs in 1922.

The proportion of people born overseas was 48.4%, compared with 27.1% nationally.

Although some people objected to giving their religion, 38.2% had no religion, 41.1% were Christian, and 15.5% had other religions.

All content from Kiddle encyclopedia articles (including the article images and facts) can be freely used under Attribution-ShareAlike license, unless stated otherwise. Cite this article:
Royal Oak, New Zealand Facts for Kids. Kiddle Encyclopedia.