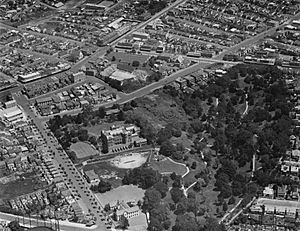 Auckland Girls' Grammar School (AGGS) is a New Zealand secondary school for girls located in Newton, in the Auckland central business district. Established in 1888, it is one of the oldest secondary institutions in the country. The school received the Goodman Fielder awards for School and Secondary School of the year in 2000.

The main block is listed as a Category II Historic Place.

All content from Kiddle encyclopedia articles (including the article images and facts) can be freely used under Attribution-ShareAlike license, unless stated otherwise. Cite this article:
Auckland Girls' Grammar School Facts for Kids. Kiddle Encyclopedia.