Grey Lynn is an inner residential suburb of Auckland City, New Zealand, located three kilometres to the west of the city centre. Originally a separate borough, Grey Lynn amalgamated with Auckland City in 1914.

Grey Lynn is centred on Grey Lynn Park, which was not part of the original subdivision of 1883, since the land was too steep and too wet for house construction. In 1914 the land was drained and levelled for playing fields. The park is home to the annual Grey Lynn Park Festival, which attracts around 100,000 visitors on the third Saturday in November.

The character of the area is often seen as "arty", and one of being a "traditional home to free-thinkers and anti-establishment types".

Grey Lynn is named for Sir George Grey (14 April 1812 – 19 September 1898), Governor of South Australia, twice Governor of New Zealand, Governor of Cape Colony (South Africa), Premier of New Zealand, and, towards the end of his life, Member Of Parliament for Auckland West. Grey's presence as MP for the area was apparently widely appreciated since following his retirement from politics and death in 1898 the north western portion of the suburb of Newton was renamed Grey Lynn in his honour.

The original subdivision was 900 acres (3.6 km2), which is still the formal extent of Grey Lynn. Most of the houses were built between the 1880s and the beginning of the First World War. Very few of the houses have been completely replaced by new structures.

Williamson Avenue and Crummer Road are two of the major streets in Grey Lynn. James Williamson and Thomas Crummer were joint owners of a farm in the area. In 1883 Williamson and Crummer sold the property to the Auckland Agricultural Company. The Surrey Hills farm was subdivided into 272 building sections to form the neighbourhood between Surrey Crescent and the southern end of Ponsonby Road. Shops are located at the intersection of Great North Road and Williamson Avenue.

Grey Lynn's streets were largely laid out by the developers as straight roads (as opposed to the earlier farm roads such as Richmond Road which twists and turns following the curve of the landscape.) Several streets are named after early landowners; Williamson, Crummer, Mckelvie, Pollen, Prime etc. But there is a prevalence of cultural personages from Britain: Sir John Millais, Lord Elgin, Alfred Lord Leighton, Coleridge, the Earl of Beaconsfield, Dr Arnold, Dickens, Dryden etc. This was obviously intended to give an artistic ambience to the area.

Most of the houses in the area were built between the 1890s and the First World War. They were built quickly and with little variation in layout. Their street facades were differentiated by the application of mass-produced items; wooden fretwork, stained glass panels, turned balusters and pressed tin (intended for interior ceilings - this 'new' product occasionally appears on the gable ends of some Villas). The most important feature was the bay window - hence the name Bay Villa - an important feature which marked the owner as middle class. The new inhabitants tended to be young couples, mostly white collar workers such as clerks and office workers, teachers or skilled crafts people. The adjacent area north of Richmond Road was probably similar. This was different from the nearby working class area of Freeman's Bay or the upper middle class area of Herne Bay.

By the 1930s and 40s the original owners were beginning to age and the fussily detailed houses of Grey Lynn on their cramped sections were seen as being very old fashioned and undesirable. The increased ownership of motorcars meant suburban development was expanding exponentially resulting in the mid 20th century ideal of the quarter-acre section. All the inner suburbs of Auckland became less desirable and areas like Grey Lynn became very rundown. Many properties became owned by people who lived elsewhere and often divided into flats or operated as Boarding Houses. Repairs were kept to a minimum and in some cases houses were not repainted for almost half a century. The fact that so many houses of this period are still standing today despite the depredations of fire, rot and borer is an indication of how well they were built.

By the 1950s the very low rents in places like Grey Lynn and Ponsonby attracted students and immigrant workers from the Pacific Islands. By the 1960s Grey Lynn had developed a definite Polynesian flavour. Although in recent years this has greatly diminished, there are still a large number of Tongan and Samoan churches in the area.

The 1970s saw a renewed interest in older Victorian properties and from that period onwards many young professionals began buying dilapidated kauri villas in areas like Grey Lynn and renovating them. From the early 1990s this gentrification process began to visibly change the area, resulting in increasing housing prices and rents. Lower-end retail enterprises have gradually been replaced with major corporate projects while the area experienced a level of gentrification. The influx of middle-class people has resulted in a reduction of student flats and the slow but steady displacement of Polynesian families. A number of recent housing developments in the suburb have attracted controversy due to their contribution to an increase in population density. 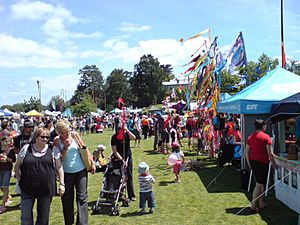 The Grey Lynn Festival in 2008

The Grey Lynn Park Festival is held in early summer in Grey Lynn Park. Begun in 1984 the event celebrated its 25th anniversary in 2009. The event is the last independent community event in the city. It is organised by four dedicated people who raise money from stall fees and charitable grants and give a lot of their time. It attracts thousands of visitors. It started as a local community get-together with working-class and Pasifika roots, though the appeal has broadened through the decades. First appearing in 1987, local band Unity Pacific have appeared many times since and headlined in 2009. The 2012 event was cancelled due to forecasts of rain. The 2014 event is scheduled for Saturday 29 November.

The suburb is served by public transport. It lies within walking distance of the central business district via Ponsonby. Buses run down Great North Road, Richmond Road, Surrey Crescent and Williamson Avenue.

All content from Kiddle encyclopedia articles (including the article images and facts) can be freely used under Attribution-ShareAlike license, unless stated otherwise. Cite this article:
Grey Lynn Facts for Kids. Kiddle Encyclopedia.