Kingsland is an inner-city suburb of Auckland, the largest and most populous urban area in New Zealand. Kingsland is under the local governance of the Auckland Council. It is the home of Eden Park, New Zealand's largest stadium, which hosted the finals for the 2011 Rugby World Cup. Kingsland has a village centre that contains a series of shops, restaurants, pubs and monthly markets.

Kingsland was established in the 1880s with the sale of allotments; the buildings predominantly date from the Edwardian and the interwar periods. Kingsland has a heritage trail that features iconic buildings and sites of interest identified by plaques, which uses smartphone technology to provide information on the local history.

New North Road is the main thoroughfare in Kingsland, running northeast–southwest from the Auckland Central Business District (CBD), with the suburb running along the ridge line. Kingsland’s main street is located on New North Road next to the Kingsland Train Station and directly across from Eden Park. Don Croot Street, which was established in the late 1960s, connects the Kingsland stretch of New North Road to the Western Springs stretch of Great North Road.

The Northwestern motorway was cut through in the 1970s, severing the cross streets that linked Kingsland to Surrey Crescent and Arch Hill, leaving Bond St as the sole direct connection to these suburbs. The presence of the motorway means a certain amount of noise, but for the most part Kingsland remains a remarkably quiet suburb. Recently there has been a certain amount of gentrification in the area resulting in several cafes and boutique shops.

The origins of Kingsland are linked to the European settlement of Auckland. In 1835, Thomas Mitchell, a Sydney trader, purchased land from Āpihai Te Kawau, rangatira (chief) of the local Māori tribe, Ngati Whatua, for £160, in a transaction which the Lands Claim Commission later disallowed. In 1841, Te Kawau gifted 3,000 acres (1,200 ha) to the colonial government and Auckland began to take shape as a city.

Land continued to be bought and sold, and in 1852 John McElwain purchased 55 acres (22 ha) for the purpose of farming and received the adjoining 60 acres (24 ha) from his brother George in what is present-day Kingsland. Cabbage Tree Swamp Road was one of the original streets in the area, but the settlers of Mt Albert, Morningside and Kingsland appealed for a change of name, and it became Kingsland Road.

Auckland experienced significant growth in population between 1874 and 1886, putting pressure on the areas closest to the city. That population growth combined with the establishment of rail and bus connections into the city by the early 1880s created excellent conditions for John McElwain to subdivide his farm. In 1882, 227 allotments were laid out. Kingsland Avenue — along with First, Second, Third and Fourth Avenues — provided road access to the properties. Prices for sections in the subdivision ranged from £28 to £100. By 1903 trams serviced the area, and Kingsland was a well-established residential suburb. 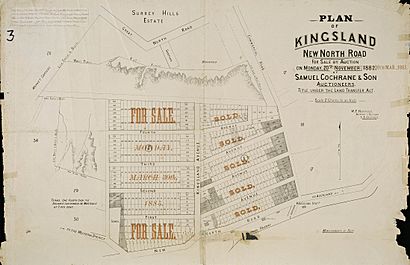 Plan of Kingsland, New North Road, for sale by auction on Monday 30 March 1885 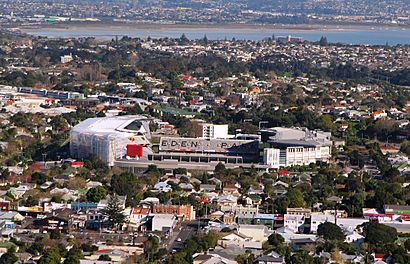 Eden Park Stadium as seen from the summit of Mount Eden. 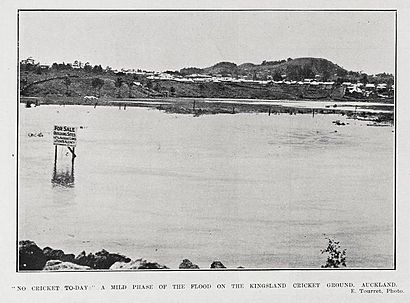 Public transportation extended from the inner city to the surrounding areas in the late 1870s and early 1880s with horse-drawn buses being the first mode of regular public transportation in the late 1870s. In 1881, the long-awaited railway came, connecting Newmarket with Helensville with stops in Mt Eden, Kingsland, Morningside and Mt Albert. At the beginning of the 20th century, trams began connecting Mt Eden, Balmoral, Kingsland and Mt Albert with the city. The trams ran for the last time in the 1950s.

Eden Park is New Zealand's largest stadium with a capacity of 50,000 seats. Every year it hosts almost half a million local and international sports fans and patrons who attend matches and functions at the park.

The park underwent a $240 million, three-year redevelopment prior to the 2011 Rugby World Cup. Including a temporary expansion to 60,000 seats and the addition of four giant Māori carvings at each of the four main public entrances. The carvings represent Tāne-mahuta, the spirit of the forest; Rongo, the god of peace; Tūmatauenga, the god of war; and Tāwhirimātea, the god of wind. The carvings were designed by Ngāti Whātua carver, Arekatera Maihi. 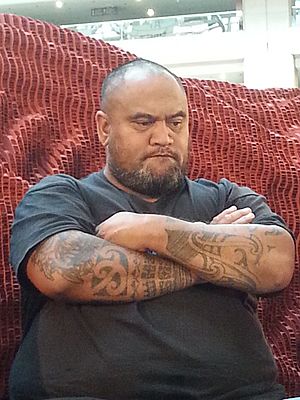 Eden Park was located at the low point of Cabbage Tree Swamp, with the road running on a causeway across it. Eden Park has been used as a sports ground since 1900, and by 1914 the ground was drained and turned into two ovals for cricket. Eden Park has been the home of Auckland Cricket since 1910 and Auckland Rugby since 1925. Its 100-year history boasts some of New Zealand's proudest sporting moments, including the 1950 Empire Games, the inaugural 1987 Rugby World Cup, and the 1992 Cricket World Cup. Since the early 1900s it has hosted major rugby and cricket matches, and is now a regular host of the Bledisloe Cup, ITM Cup, and the Super Rugby games. Most recently, Eden Park hosted the finals for the 2011 Rugby World Cup and it has been named the co-host for 2015 Cricket World Cup.

The underground rivers that run through the area are known by the Māori as Ngā Ana Wai, which translates to ‘the watery caves.’ These ancient lava caverns were created 30,000 years ago during the eruption of Mount Albert and Maungawhau / Mount Eden. Water springs up at various locations including Eden Park grounds, which previously was swamp land.

Many of Kingsland’s older buildings have survived by adapting to contemporary uses.

Herbs — a Pacific reggae band that formed in 1979 and produced a stream of reggae hits and 10 top-20 hits in the early 1990s. Herbs call Ponsonby their home, but their base of operations was set in Kingsland.

John McElwain — Kingsland’s first land developer, was born in County Louth, Ireland in 1821 and died in Auckland at the age of 95 in 1916. Impatient to see the hill-climb to his property reduced in grade, he subdivided in 1882. Later work by the Highway Board improved New North Road by cutting down three feet from McElwain’s Hill between Kingsland and Morningside.

Pat Kraus — a musician and synthesizer-builder who records and performs in Kingsland as Kraus.

Kingsland is well-served by trains and buses, and is only 5 km from Auckland’s CBD. The train station is right in the heart of Kingsland village, and trains run regularly into the city and the western suburbs beyond.

The centre of the shopping and business activities in Kingsland is New North Road. By vehicle Kingsland can be accessed from the North Western Motorway (SH16) by taking the St Lukes off-ramp or from the CBD via Bond Street and Great North Road.

All content from Kiddle encyclopedia articles (including the article images and facts) can be freely used under Attribution-ShareAlike license, unless stated otherwise. Cite this article:
Kingsland, New Zealand Facts for Kids. Kiddle Encyclopedia.