Helensville is also the name of an electorate seat in the Parliament of New Zealand. The current member for Helensville is John Key, leader of the National Party and Prime Minister. 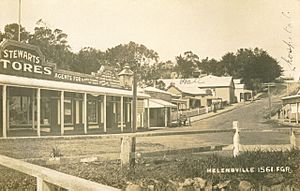 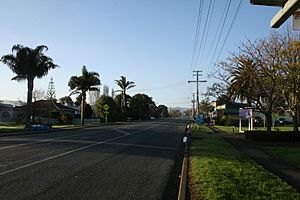 The area around Helensville was originally called Te Awaroa, meaning "The long path" or "The long river valley". The first European settlers in the district were Scottish timber millers named McLeod but who had actually come from Nova Scotia to New Zealand. John McLeod built a house which he named "Helen's Villa" in honour of his wife, and the name soon became that of the surrounding settlement.

Initial development of the town was around the kauri milling industry, but by the start of the 20th century dairying was becoming of increasing importance. It was also becoming somewhat of a tourist centre, owing to the presence of hot springs 3 km to the west of the town at Parakai.

A lot of the early history of Helensville is described in the book "Men Came Voyaging" written by Colleen Sheffield who lost her life in a bus accident before the book was completed.

All content from Kiddle encyclopedia articles (including the article images and facts) can be freely used under Attribution-ShareAlike license, unless stated otherwise. Cite this article:
Helensville Facts for Kids. Kiddle Encyclopedia.