In Māori mythology, Tāne (also called Tāne-mahuta, Tāne-nui-a-Rangi, and several other names) is the god of forests and of birds, and the son of Ranginui and Papatūanuku, the sky father and the earth mother, who used to lie in a tight embrace where their many children lived in the darkness between them.

On Tahiti, Tane was the god of peace and beauty. 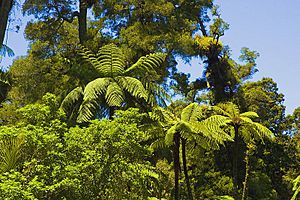 New Zealand rainforest: the trees and birds are the children of Tāne

The children of Rangi and Papa grew frustrated at their confinement in the cramped space between their parents. Tū, future god of war, proposes that they should kill their parents. But Tāne (or Tāne-mahuta) disagrees, suggesting that it is better to separate them, sending Rangi into the sky and leaving Papa below to care for them. Tāne's brothers Rongo, then Tangaroa, Haumia-tiketike and Tū all try in vain to separate the parents. After many tries, Tāne lies on his back and pushes with his strong legs, and finally forces his parents apart, and Rangi rises high into the heavens. Then Tāne searched for heavenly bodies as lights so that his father would be appropriately dressed. He obtained the stars and threw them up, along with the moon and the sun. At last Rangi looked handsome.

Tāwhirimātea, the god of storms and winds, is angry that the parents have been torn apart. He joins his father in the sky and punishes the earth and sea with violent storms. Tāwhirimātea attacks the forests of Tāne, snapping the trunks of the trees, shattering the trees to the ground, leaving them as food for decay and insects. Then he attacks the oceans, and Tangaroa, the god of the sea, flees. Two of Tangaroa's descendants, Ikatere, father of fish and Tu-te-wehiwehi (or Tu-te-wanawana), the ancestor of reptiles, are terrified by Tāwhirimātea's fury. The fish flee into the sea, and the reptiles into the forests. Ever since, Tangaroa has resented Tāne for hiding his runaway children. So it is that Tāne supplies the descendants of Tūmatauenga with canoes, fishhooks, and nets to catch the descendants of Tangaroa. Tangaroa retaliates by overturning canoes and sending floods that sweep away houses, land and trees.

Some legends say that Tāne made the first man, named Tiki. More widely known is a tradition that Tāne was trying to find himself a wife, but at first he found only non-human females and fathered insects, birds, and plants. One such was Rangahore, who gave birth to a stone and was abandoned by Tāne. Then he made a woman by moulding her from the soil.

In some stories, Tāne marries his daughter Hine-tītama without her knowing who he is. Upon discovering that she has married her father, she flees to the underworld, and becomes the goddess of death, Hine-nui-te-pō. Tāne follows her and begs her to return. She tells him to return to the world and raise their children, while she will wait below to receive them when they die.

Other traditions tell of the three baskets of knowledge that Tāne brought down from the heavens.

All content from Kiddle encyclopedia articles (including the article images and facts) can be freely used under Attribution-ShareAlike license, unless stated otherwise. Cite this article:
Tāne Facts for Kids. Kiddle Encyclopedia.