A view of the Auckland works of the Colonial Ammunition Company

The Colonial Ammunition Company (CAC) was an ammunition manufacturer in Auckland, New Zealand. Its predecessor, Whitney & Sons, was established by John Whitney with government encouragement in 1885 during the Russian Scare. Whitney later recruited investors to expand his factory in 1888. The other shareholders were Messrs Greenwood and Batley, of Leeds (owners of the Greenwood & Batley cartridge company); T. Hall, Esq., of Mount Morgan; J. D' Arcey, Esq.; Captain de Lusada, R.N.; J. Clarke, Esq.; and T.Y. Cartwright of Notts. They formed the Colonial Ammunition Company, the first ordnance manufacturer in Australasia.

Components were made in New Zealand and Australia, shipped to England, and then assembled at the Greenwood & Batley plant in Leeds. The finished cartridges were then shipped back to Australia and New Zealand for sale. It later expanded in other business directions from 1925 on.

In the Second World War, it was New Zealand's only industrial manufacturer of ammunition (having temporarily increased its workforce from 230 to 900), with production in countries like Australia having long since overtaken the small size of the New Zealand market for ammunition.

The company operated extensive facilities in Mount Eden, a central suburb of Auckland (originally on the outskirts of the city). The area is now mostly taken up by commercial redevelopment. Remaining from the original facilities are two iconic structures: 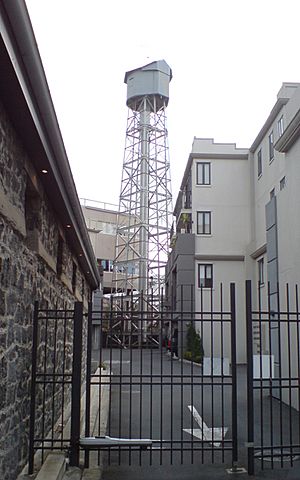 The shot tower at Mount Eden, with the bluestone building at the left.

Following the entry of the Japanese Empire into the Second World War, there was concern that the site at Mount Eden would be too exposed to a coastal attack. In light of this, production of munitions was transferred to Hamilton. After equipment was relocated and buildings constructed and manufacturing at a site on Dey Street, production commenced in June 1942. The facility was closed after the end of the war and equipment and production was transferred back to Mount Eden.

This factory was built in 1888 in Australia at Footscray, Victoria, a suburb of Melbourne. It was founded by Captain John Whitney of CAC New Zealand in a joint venture with a number of English partners and was a separate entity from the commercial New Zealand company. The Australian government leased the facility from CAC on 1 January 1921 and bought the facility outright in 1927 and renamed it the Small Arms Ammunition Factory No.1. Five other facilities were briefly opened during World War 2: a new factory at Footscray (SAAF No. 2), two more built at Hendon (SAAF No. 3 & No. 4), one built at Rocklea (SAAF No. 5), and one built at Welshpool (SAAF No. 6). The SAAF No. 1 facility was finally closed in 1945 and was replaced by the nearby SAAF No.2 facility. The facility is now more commonly known as Ammunition Factory Footscray (AFF).

All content from Kiddle encyclopedia articles (including the article images and facts) can be freely used under Attribution-ShareAlike license, unless stated otherwise. Cite this article:
Colonial Ammunition Company Facts for Kids. Kiddle Encyclopedia.