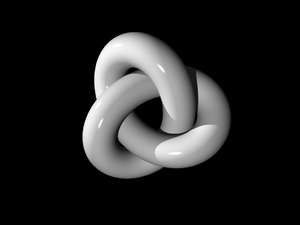 The trefoil knot is the simplest mathematical knot. It is impossible to untie without breaking the 'rope'.

Knot theory is the study of knots in mathematics. In knot theory, the ends of the rope are attached so that there is no possible way for the knot to be untied. Peter Guthrie Tait was the first person to make charts describing mathematical knots in the 1860s.

All content from Kiddle encyclopedia articles (including the article images and facts) can be freely used under Attribution-ShareAlike license, unless stated otherwise. Cite this article:
Knot theory Facts for Kids. Kiddle Encyclopedia.