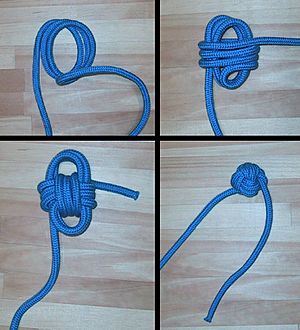 How to tie a Monkey fist knot

A knot is a fixed looping of a piece of string or rope. Knots are often used for binding things together. While a knot is often made from rope, it can also be made from many other things. In fact, a knot is actually the condition a long flexible object is in. For example, hair can be tied in a knot. The ends of balloons are tied in a knot to prevent the air from escaping.

The average person over 5 or so years of age is likely capable of tying a knot; most of these knots people tie are probably with their shoelaces. Ribbons are also tied in a knot so as to appear pretty, as when wrapped around a gift.

In addition, knots are also made by sailors in many different forms and for many different purposes. There are even people who have adopted knot-making as a hobby. There is a large variety of knots, each with properties that make it suitable for a range of tasks.

A knot in the strictest sense serves as a stopper or knob at the end of a rope to keep that end from slipping through a grommet or eye. Knots have excited interest since ancient times for their practical uses, as well as their topological intricacy, studied in the area of mathematics known as knot theory. 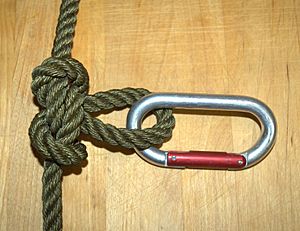 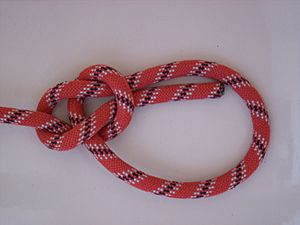 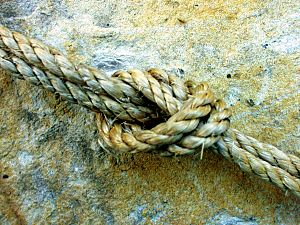 All content from Kiddle encyclopedia articles (including the article images and facts) can be freely used under Attribution-ShareAlike license, unless stated otherwise. Cite this article:
Knot Facts for Kids. Kiddle Encyclopedia.