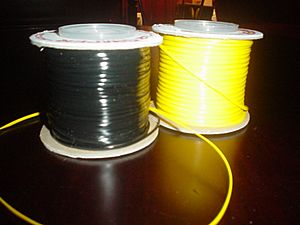 Scoubidou (gimp, lanyard, scoubi, scoobie, boondoggle, color wraps, neckspressions, or rex-lace) is a knotting craft, originally aimed at children. It originated in France, where it became a fad in the late 1950s and has remained popular. It is named after the 1958 song of the same name by the French singer Sacha Distel.

Scoubidou returned to fashion in various countries, including the United Kingdom, in 2004 and 2005. It uses commercially supplied plastic strips or tubes.

The most common kind of thread used for the craft is flat and comes in many colors. Another kind of scoubidou thread is supple, round and hollow plasticized PVC tubes usually about 80 centimetres in length. They are sold in various colors, sizes and types, and are used to make items by binding them together with knots. On account of their elasticity and hollow cross-section—which allow them to collapse and deform when pulled—they form tight and stable knots. Key chains, friendship bands and other trinkets are most commonly woven, although more complicated shapes and figures can also be created.

Most of the knots used in scoubidou were already used in bast fibre, while the creations possible with scoubidou are similar to traditional corn dollies and macrame. 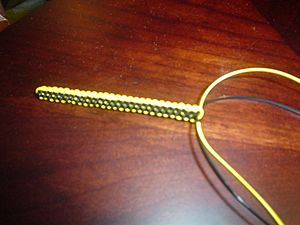 Also known as a box stitch, the square stitch is the most common knot used in making keychains. It uses two strands of gimp. The square stitch is made by taking the end and crossing opposite ends, then taking one of the other ends and going over the first string and going under the second string. To finish, the last end is woven over the first strand and under the second strand.

A double square stitch (or triple) can be made using four strings, thus doubling the size of the keychain made. Again the process is done by weaving the ends alternately. Many think the easiest way to create a square stitch is taking two strands of the same color and weaving the other two strands through them.

"Barrel" can be done by completing the actions of a square stitch, but instead of crossing the ends straight over, the ends are crossed diagonally. This causes the creation to be cylindrical

Other numbers of strands 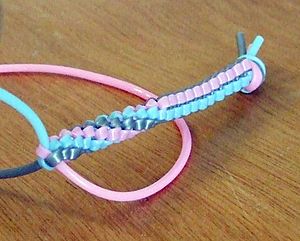 A three-stranded scoubidou, with the first part done in a square knot and the second done in a spiral

A four-stranded scoubidou, with three laces 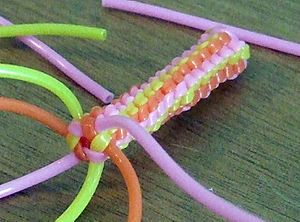 The square stitch uses four strands (resulting from the two ends of each of two scoubidous). Other numbers of strands may be used for the simple woven scoubidou chain, although with more than six the structure becomes difficult to support. Using even numbers of strands allows one end of the construction to be neatly terminated in the middle of a strand (as in the example of the square stitch).

As with the square stitch, each layer may be constructed either with the same direction of weave (leading to a chiral spiral structure) or as a mirror image of the previous layer (leading to a more angular appearance).

The double spiral, or twist, is the same concept as the spiral knot however the number of strings is doubled.

The cobra stitch (or snake) involves tying two strands around two other strands back and forth. A super cobra (or king cobra) is created when the strands are tied around the cobra itself, making it wider and larger.

One strand is tied around one or more other strands. The more strands that are used in the middle the fatter the Chinese staircase is. This is made with different colour strings.

One loop strand is put through another and the latter loop pulled. The loops are then twisted together to look like a butterfly.

Many scoubidou stitches which are commonly done with small numbers of strands can be generalized to use any number of strands. The Super-16 is a large scoubidou consisting of sixteen strands woven together. The Super-16 can be compared to the Square stitch but on a much larger scale. 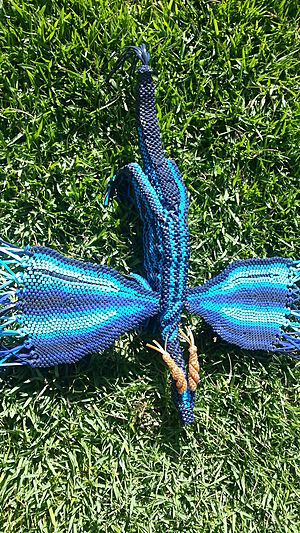 This is a dragon made with lanyard (scoubidou) strings. More than 60 different strings were used to make it.

Creations such as dragons, Eiffel towers, bridges and birds can be made by putting wires inside the stitch to keep it stable, and to be able to bend the stitch and keep it bent.

All content from Kiddle encyclopedia articles (including the article images and facts) can be freely used under Attribution-ShareAlike license, unless stated otherwise. Cite this article:
Scoubidou Facts for Kids. Kiddle Encyclopedia.