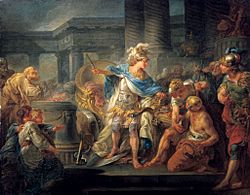 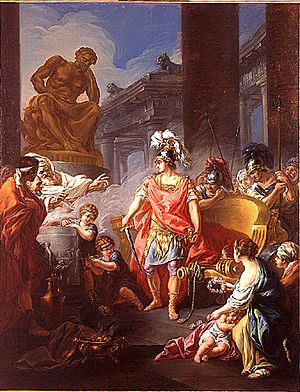 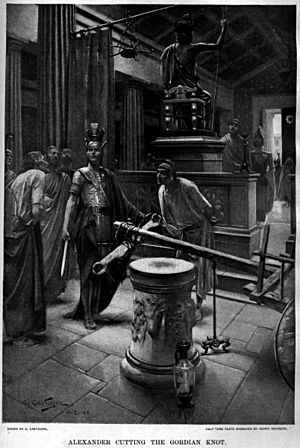 The Gordian Knot is a legend of Phrygian Gordium associated with Alexander the Great. It is often used as a metaphor for an intractable problem (untying an impossibly tangled knot) solved easily by finding an approach to the problem that renders the perceived constraints of the problem moot ("cutting the Gordian knot"):

Turn him to any cause of policy,
The Gordian Knot of it he will unloose,
Familiar as his garter

The Phrygians were without a king, but an oracle at Telmissus (the ancient capital of Lycia) decreed that the next man to enter the city driving an ox-cart should become their king. A peasant farmer named Gordias drove into town on an ox-cart and was immediately declared king. Out of gratitude, his son Midas dedicated the ox-cart to the Phrygian god Sabazios (whom the Greeks identified with Zeus) and tied it to a post with an intricate knot of cornel bark (Cornus mas). The knot was later described by Roman historian Quintus Curtius Rufus as comprising "several knots all so tightly entangled that it was impossible to see how they were fastened".

The ox-cart still stood in the palace of the former kings of Phrygia at Gordium in the fourth century BC when Alexander arrived, at which point Phrygia had been reduced to a satrapy, or province, of the Persian Empire. An oracle had declared that any man who could unravel its elaborate knots was destined to become ruler of all of Asia. Alexander wanted to untie the knot but struggled to do so. He then reasoned that it would make no difference how the knot was loosed, so he drew his sword and sliced it in half with a single stroke. In an alternative version of the story, Alexander loosed the knot by pulling the linchpin from the yoke.

Sources from antiquity agree that Alexander was confronted with the challenge of the knot, but his solution is disputed. Both Plutarch and Arrian relate that, according to Aristobulus, Alexander pulled the knot out of its pole pin, exposing the two ends of the cord and allowing him to untie the knot without having to cut through it. Some classical scholars regard this as more plausible than the popular account. Literary sources of the story include Alexander's propagandist Arrian (Anabasis Alexandri 2.3), Quintus Curtius (3.1.14), Justin's epitome of Pompeius Trogus (11.7.3), and Aelian's De Natura Animalium 13.1.

Alexander later went on to conquer Asia as far as the Indus and the Oxus, thus fulfilling the prophecy.

All content from Kiddle encyclopedia articles (including the article images and facts) can be freely used under Attribution-ShareAlike license, unless stated otherwise. Cite this article:
Gordian Knot Facts for Kids. Kiddle Encyclopedia.