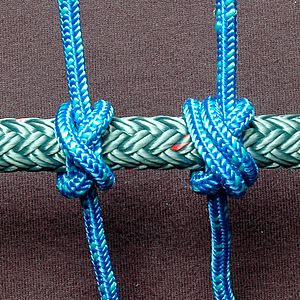 The constrictor knot is one of the most effective binding knots. Simple and secure, it is a harsh knot that can be difficult or impossible to untie once tightened. It is made similarly to a clove hitch but with one end passed under the other, forming an overhand knot under a riding turn. The double constrictor knot is an even more robust variation that features two riding turns.

First called "constrictor knot" in Clifford Ashley's 1944 work The Ashley Book of Knots, this knot likely dates back much further. Although Ashley seemed to imply that he had invented the constrictor knot over 25 years before publishing The Ashley Book of Knots, research indicates that he was not its originator. Ashley's publication of the knot did bring it to wider attention.

Although the description is not entirely without ambiguity, the constrictor knot is thought to have appeared under the name "gunner's knot" in the 1866 work The Book of Knots, written under the pseudonym Tom Bowling. in relation to the clove hitch, which he illustrated and called the "builder's knot". He wrote, "The Gunner's knot (of which we do not give a diagram) only differs from the builder's knot, by the ends of the cords being simply knotted before being brought from under the loop which crosses them." Oddly, when J. T. Burgess copied from Bowling, he changed this text to merely state "when the ends are knotted, the builder's knot becomes the gunner's Knot." Although this clove hitch with knotted ends is a workable binding knot, Burgess was not actually describing the constrictor knot. In 1917, A. Hyatt Verrill illustrated Burgess' clove hitch variation in Knots, Splices and Rope Work.

The constrictor knot was clearly described but not pictured as the "timmerknut" ("timber knot") in the 1916 Swedish book Om Knutar ("On Knots") by Hjalmar Öhrvall. Finnish scout leader Martta Ropponen presented the knot in her 1931 scouting handbook Solmukirja ("Knot Book"), the first published work known to contain an illustration of the constrictor knot. Cyrus L. Day relates that, "she had never seen it in Finland, she wrote to me in 1954, but had learned about it from a Spaniard named Raphael Gaston, who called it a whip knot, and told her it was used in the mountains of Spain by muleteers and herdsmen." The Finnish name "ruoskasolmu" ("whip knot") was a translation from Esperanto, the language Ropponen used to correspond with Gaston.

The method shown below is the most basic way to tie the knot. There are also at least three methods to tie the constrictor knot in the bight and slip it over the end of an object to be bound.

If a stronger and even more secure knot is required an extra riding turn can be added to the basic knot to form a double constrictor knot. It is particularly useful when tying the knot with very slippery twine, especially when waxed. Adding more than one extra riding turn does not add to its security and makes the knot more difficult to tighten evenly.

This variation is useful if it is known beforehand that the constrictor will need to be released. Depending on the knotting material and how tightly it is cinched, the slipped form can still be very difficult to release. 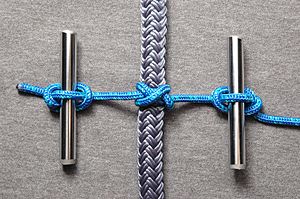 The constrictor knot is appropriate for situations where secure temporary or semi-permanent binding is needed. Made with small-stuff it is especially effective, as the binding force is concentrated over a smaller area. When tying over soft material such as the neck of a bag, hard stiff cord is more effective. When tying over hard surfaces, soft stretchy line is preferred. The constrictor knot's severe bite (which makes it so effective) can damage or disfigure items it is tied around. To exert extreme tension on the knot without injuring the hands, one can fashion handles using marlinespike hitches made around two rods.

Constrictor knots can be used for temporarily binding the fibres of a rope (or strand ends) together while splicing, or when cutting to length and before properly whipping the ends. Constrictor knots can also be quite effective as improvised hose clamps or cable ties. The knot has also been recommended for ligatures in human and veterinary surgery, where it has been shown to be far superior to any of the knots commonly used for ligation. Noted master-rigger Brion Toss says of the constrictor: "To know the knot is to constantly find uses for it…" 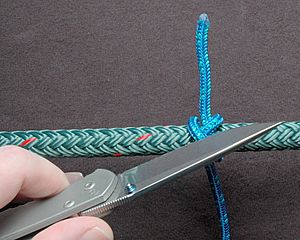 A heavily tightened constrictor knot will likely jam. If the ends are long enough, one can sometimes untie it by pulling one end generally parallel to the bound object and a bit up away from it, and prying it into the opposite end's part to open the knot. Tools that can be forced between parts of the knot (such as picks and marlinespikes) may help.

If the ends have been trimmed short, or the knot is otherwise hopelessly jammed, it can be easily released by cutting the riding turn with a sharp knife. The knot will spring apart as soon as the riding turn is cut. If care is taken not to cut too deeply, the underlying wraps will protect the bound object from being damaged by the knife.

The constrictor and double constrictor are both extremely secure when tied tightly around convex objects with cord scaled for the task at hand. If binding around a not fully convex, or square-edged object, arrange the knot so the overhand knot portion is stretched across a convex portion, or a corner, with the riding turn squarely on top of it. In situations where the object leaves gaps under the knot and there are no corners, it is possible to finish the constrictor knot off with an additional overhand knot, in the fashion of a reef knot, to help stabilize it. Those recommendations aside, constrictor knots do function best on fully convex objects.

If the constricted object (such as a temporarily whipped rope) ends very close to where a constrictor binds it, a boa knot may prove a more stable solution.

All content from Kiddle encyclopedia articles (including the article images and facts) can be freely used under Attribution-ShareAlike license, unless stated otherwise. Cite this article:
Constrictor knot Facts for Kids. Kiddle Encyclopedia.