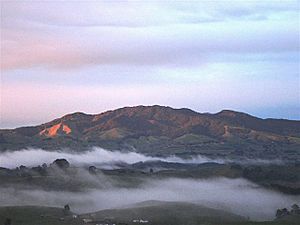 Maungatautari viewed in the morning.

Maungatautari is a mountain, rural community and ecological area near Cambridge in the Waikato region in New Zealand's central North Island.

The New Zealand Ministry for Culture and Heritage gives a translation of "mountain of the upright stick" for Maungatautari.

The Maungatautari Restoration Project is the largest ecological restoration project in New Zealand.

The project is engineered to remove all non-native pest mammals and predators and restore endangered native flora and fauna to Maungatautari. There is no intention to restrict all introduced birds, but efforts will be made to control exotic wasps. It includes private land and a government-owned scenic reserve administered by Waipa District Council. It is a community project managed by the Maungatautari Ecological Island Trust.

Maungatautari is an eroded andesitic volcano. It was chosen as a suitable site for the project for a number of reasons, including the diversity of its terrain, the relative integrity of natural areas in spite of some human engineered changes, the commitment of surrounding communities, and the feasibility of fence-construction given surrounding developed terrain.

Some elements of the diversity of Maungatautari took scientists by surprise. In April 2006, the discovery of 100 silver beech trees caused considerable excitement in the botanical community. The tree, native to southern New Zealand, had not previously been believed to be present on Maungatautari, although researchers who came to investigate emphasized that the tree had probably been established during the last ice age. The largest of the trees were estimated to be several centuries old. Jim Mylchreest, Maungatautari Trust's chief executive, pointed out that the trees were not only exciting in themselves, but also for the fungi and insects they might host that also may not have been expected to be present on Maungatautari.

In December 2004, eleven endangered Hochstetter's frogs were found living on Maungatautari in a rocky region. There had already been discussions about potentially reintroducing the Hochstetter's frog to the preserve, and the rare discovery of the small population in an environment being prepared to protect them excites the scientific community.

A dead Duvaucel's gecko was found in a mouse trap in March 2010; this was the first sighting of this species on mainland New Zealand for almost 100 years, probably indicating a surviving population of the gecko within Maungatautari.

Because poisons and trapping, traditional methods of pest control, have limited success and seldom last long, the creators of the plan decided to enclose the 34 square kilometres of bush with a 47 km pest-exclusion fence to create an ecological island. When the environment is rendered suitable, the area will be repopulated with the entire suite of charismatic species that may now be locally extinct, such as North Island brown kiwi, North Island kōkako, kakariki, tuatara and many others. Kaka already visit regularly and are likely to become resident if suitable methods are employed.

In November 2003, the Trust constructed two exclosures, at the north and south of Maungatautari, totalling 1.1 square kilometres. The Trust used these areas to demonstrate the fence's feasibility and to test pest removal methods, which were launched in September 2004. The exclosures are now predator-free and were used as holding areas for native species while the main fence was being built. 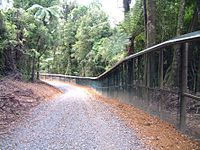 In July 2004, the Trust began constructing the Xcluder fence. In September 2006 the Trust completed fencing the entire 34 square kilometres to exclude all pests (and was able to take advantage of parts of the exclosures' fencing constructed at Stage 1). Then the Trust began eliminating pests by dropping poison, starting with brodifacoum in November 2006. A second application was made in December 2006. The combined effect of the poison, trapping and hunting eliminated brown rats, black rats, stoats, cats, weasels, ferrets, red deer, fallow deer, pigs, goats, possums, hedgehogs, rabbits and hares. In 2007 the sole remaining pest species was mice, and poison was dropped a third time, in September that year, to eradicate them. This failed, and in 2011 the trust introduced a new policy, focusing on controlling rather than eradicating mice.

One of the greater challenges facing the designers of the Xcluder fence adopted for the purpose was addressing entry at streams. Since water levels fluctuate and a fence needed to address both debris and fish migration, the Xcluder was outfitted with an electronic surveillance system to alert the Trust if a watergate fails to properly close. There have been other challenges with the fence, including storm damage in July 2007 that was quickly repaired.

In July 2006, a viewing tower was constructed near a northern rata grove in the southern exclosure.

Since the beginning of the project, native species have returned to the area either naturally or through reintroduction. In July 2007, a 300% increase was discovered in the native beetle population of the southern enclosure.

In December 2005 Maungatautari witnessed its first kiwi call in approximately a hundred years. Radio signals in April 2007 suggested that the kiwi may be sitting on an egg, but that nest was found to be bare. In September 2007, two kiwi eggs were discovered. Although one proved infertile, the other hatched in December 2007, the first kiwi egg known to have hatched on Maungatautari in a century. 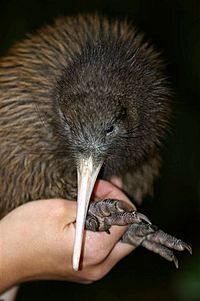 In June 2006, the Trust began reintroducing species, starting with a pair of critically endangered takahē. In April 2007, three species of endangered whitebait (kokopu or native trout) were reintroduced. In May, kākā were put into a special enclosure to allow them to acclimatise before they were released; they quickly attracted wild companions. In November of that year, seven kākā were released from the aviary. 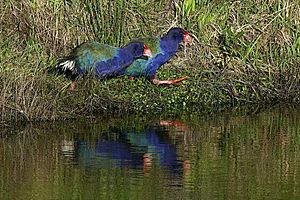 (Survey yet to be done)

The proportion of people born overseas was 18.6%, compared with 27.1% nationally.

Horahora School is a co-educational state primary school, with a roll of 21 as of July 2016. The school was established in 1909.

Maungatautari School was a primary school established in 1903 and closed in 2011.

All content from Kiddle encyclopedia articles (including the article images and facts) can be freely used under Attribution-ShareAlike license, unless stated otherwise. Cite this article:
Maungatautari Facts for Kids. Kiddle Encyclopedia.