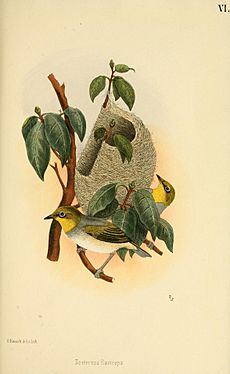 The silvereye or wax-eye (Zosterops lateralis) is a very small omnivorous passerine bird of the south-west Pacific. In Australia and New Zealand its common name is sometimes white-eye, but this name is more commonly used to refer to all members of the genus Zosterops, or the entire family Zosteropidae.

In New Zealand, the silvereye was first recorded in 1832. It arrived in greater numbers in 1856, and it is assumed that a migrating flock was swept eastwards by a storm. As an apparently self-introduced bird it is protected as a native New Zealand species. Its Māori name, tauhou, means "stranger" or more literally, "new arrival".

The Silvereye was first described by the English ornithologist John Latham in 1801 under the binomial name Sylvia lateralis. There are 17 subspecies: 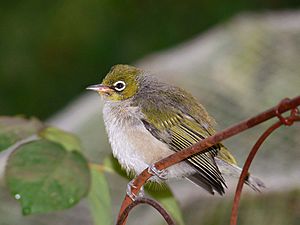 A small bird 11 to 13 cm in length and around 10 g in weight, it has a conspicuous ring of white feathers around its eye. There are a number of plumage variations depending on the sub-species. Generally it has olive-green wings and either a grey or olive-green back, a lighter coloured throat - yellow or grey, flanks that range from chestnut to pale buff, and an undertail that may be white or yellow. Within Australia there are seasonal migrations and the ranges of the sub-species overlap. The other islands within its range tend to host only a single sub-species each so only one plumage variant is seen. 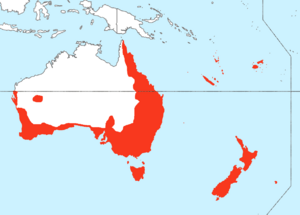 The silvereye is native to Australia, New Zealand and the south-west Pacific islands of Lord Howe, New Caledonia, Loyalty Islands, Vanuatu, and Fiji. It is common to abundant throughout the relatively fertile south-west and south-east parts of Australia (including Tasmania and the Bass Strait islands), and through the well-watered coastal zone of tropical Queensland, including Cape York Peninsula

The silvereye is liable to be found in any vegetated area, apart from open grasslands, within its distribution range, including forest, scrub, horticultural blocks and urban gardens.

The silvereye feeds on insect prey and large amounts of fruit and nectar, making them occasional pests of commercial orchards. 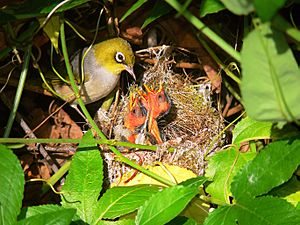 Silvereyes breed in spring and early summer (mainly between September and December), making a tiny cup of grass, moss, hair, spiderweb, and thistledown, suspended from a branch fork in the outer reaches of small trees or shrubs. They lay two to four pale blue eggs, and two (or sometimes three) broods may be raised during each breeding season. The eggs hatch after about 11 days, and the young fledge after another 10 days. The juveniles are independent at 3 weeks and able to breed at 9 months.

In late summer silvereyes gather into flocks and many Australian birds migrate, making their way north along the coast and ranges, foraging busily during the day with much calling and quick movement through the shrubbery, then flying long distances through the night.

Most of the Tasmanian population crosses the Bass Strait (an astonishing feat for 12 cm birds weighing only a few grams) and disperses into Victoria, New South Wales, and south-eastern Queensland. The populations of these areas tend to head further north; while the northernmost birds remain resident all year round. In western Australia they have been recorded moving between the mainland and offshore islands.

Silvereyes are omnivorous with a diet that includes insects, berries, fruit and nectar. In New Zealand they take fruit from native trees including kahikatea, and rimu. When food is scarce in winter they will take a wide variety of foods from bird tables, ranging from sugar water through bread and cooked meats, to solid lumps of fat.

They perform a valuable service in gardens and orchards, eating insects harmful to produce, including aphids, scale insects, and the diamondback moth. However some orchardists, grape growers and home gardeners regard them as a serious pest particularly as, being so small, they simply ignore bird nets, popping in and out through the netting at will. They are attracted to a wide range of fruit species, including apples, citrus, feijoas, figs, grapes, pears and persimmons. 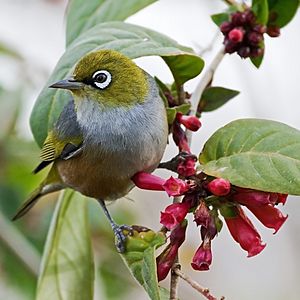 A silvereye features as the main character, Honey, in the illustrated children's books Honey and Bear, Special Days with Honey and Bear and The Honey and Bear Stories, by Ursula Dubosarsky and illustrated by Ron Brooks. In Brooks' 2010 memoir Drawn from the Heart he describes how he was inspired by a silvereye he saw in his Tasmanian garden - "those large silver rings with a fine black line around the outer edge, right round the eyes ... She's perfect, I thought. That's her! That's Honey."

All content from Kiddle encyclopedia articles (including the article images and facts) can be freely used under Attribution-ShareAlike license, unless stated otherwise. Cite this article:
Silvereye Facts for Kids. Kiddle Encyclopedia.