Flinders Island, the largest island in the Furneaux Group, is a 1,367-square-kilometre (528 sq mi) island located in the Bass Strait, northeast of Tasmania, Australia. Flinders Island is situated 54 kilometres (34 mi) from Cape Portland and it is located on 40° south, a zone known as the Roaring Forties.

Flinders Island was first inhabited at least 35,000 years ago, when people made their way from Australia across the then-land bridge which is now Bass Strait. A population remained until about 4,500 years ago, succumbing to thirst and hunger following an acute El Niño climate shift.

Some of the south-eastern islands of the Furneaux Group were first recorded in 1773 by British navigator Tobias Furneaux, commander of HMS Adventure, the support vessel with James Cook on Cook's second voyage. In February 1798 British navigator Matthew Flinders charted some of the southern islands, using one of the schooner Francis' open boats. Later that year, Flinders returned and finished charting the islands in the Norfolk, he then went on to complete the first circumnavigation of Tasmania (1798–99), accompanied by George Bass, proving Tasmania to be an island separated from the Australian mainland by Bass Strait, later named in honor of George Bass.

James Cook named the islands Furneaux's Islands, after Tobias Furneaux. Flinders named the largest island in the group "Great Island". He also named a group of mountains on Flinders Island, the "Three Patriarchs". The small island just to the east, Flinders named "Babel Island" from the noises made by the seabirds there. Phillip Parker King later named the largest island Flinders Island, after Matthew Flinders. Flinders named Mount Chappell Island after his wife Ann née Ann Chappelle. There are three islands named "Flinders' Island"—the large island on the east side of Bass Strait, named by Phillip Parker King; an island in the Investigator Group of South Australia, named by Matthew Flinders after his young brother Samuel Flinders (midshipman on the Investigator); and an island in the Flinders Group north of Cooktown, Queensland was named after Matthew Flinders.

In the late 18th century, the island was often frequented by sealers and Aboriginal Australian women, the majority of whom had been kidnapped from their mainland tribes. Seal stocks soon collapsed, causing the last sealing permit to be issued in 1828. Many sealers' families chose to stay in the Furneaux Group, subsisting on cattle grazing and muttonbirding.

From 1830, the remnants of the Tasmanian Aboriginal population were exiled to Settlement Point (or Wybalenna, meaning "Black Man's House" in the language of the Ben Lomond people) on Flinders Island. These 160 survivors were deemed to be safe from white settlers here, but conditions were poor, and the relocation scheme was short-lived. In 1847, after a campaign by the Aboriginal population against their Commandant, Henry Jeanneret, which involved a petition to Queen Victoria, the remaining 47 Aboriginals were again relocated, this time to Oyster Cove Station, an ex-convict settlement 56 kilometres south of Tasmania's capital, Hobart, where it is thought that Truganini, the last full-blood Tasmanian Aboriginal Australian, died in 1876.

From the late 19th century freehold land was given out, but it was not until the 1950s that a proper settlement scheme was initiated, mainly drawing settlers from mainland Tasmania and central New South Wales to Flinders Island's eastern shore. The Municipality of Flinders Island was instituted in 1903.

The island is about 62 kilometres (39 mi) from north to south, and 37 kilometres (23 mi) from east to west. with a total land area of 1,333 square kilometres (515 sq mi). Mount Strzelecki in the south west is the island's highest peak at 756 metres (2,480 ft). About a third of the island is mountainous and rugged with ridges of granite running the length of the island. The coastal areas are dominated by sandy deposits often taking the shape of dunes. Many coastal lagoons punctuate the eastern shore, formed by dunes blocking further drainage. This drainage is mainly provided by many small streams, few of them permanently flowing directly leading to the waters of Bass Strait or such a lagoon.

The coastal areas are mainly covered in scrub or shrubs, whereas the vegetation at a higher elevation consists of woodland, mainly eucalyptus species. The total number of plant species in the Furneaux Group well exceeds 800, showing the great biodiversity of its ecosystem. Native bird species include the Cape Barren goose (Cereopsis novaehollandiae) and the short-tailed shearwater (Puffinus tenuirostris). Marsupial mammals are represented by Bennett's wallaby (Macropus rufogriseus), brushtail possum (Trichosurus vulpecula), eastern pygmy possum (Cercartetus nanus), potoroo (Potorous apicalis), common ringtail possum (Pseudocheirus peregrinus) and Tasmanian pademelon (Thylogale billardierii). The cape fur seal (Arctocephalus pusillus) is the sole placental mammal commonly found on Flinders. It is the only remaining habitat of a subspecies of common wombat, V. u. ursinus, which is listed as vulnerable by the Environment Protection and Biodiversity Conservation Act 1999 and IUCN Red List. The area surrounding Mount Strzelecki in the south west of the island constitutes Strzelecki National Park. The island also supports a population of feral turkeys (Meleagris gallopavo).

Flinders Island has a warm-summer Mediterranean climate (Csb). The summers are drier and less cloudy than the winters, and annual average rainfall totals less than 800 mm (31 in). 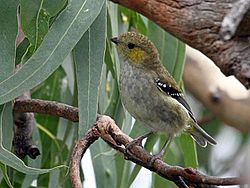 Flinders Island is an important site for the forty-spotted pardalote

A 30 km2 tract of land on the island, lying mainly to the north and east of Whitemark, has been identified as an Important Bird Area (IBA) because it contains three breeding colonies of the endangered forty-spotted pardalote and habitat used by flame robins. It also supports populations of several of Tasmania's restricted-range endemic bird species, including the green rosella, yellow-throated honeyeater, black-headed honeyeater, strong-billed honeyeater, Tasmanian thornbill, black currawong and dusky robin.

A 187 km2 strip of land extending the full 70 km length of Flinders Island's eastern coastline has also been identified as an IBA. it supports small numbers of fairy terns, large numbers of hooded plovers and over 1% of the world populations of chestnut teal, pied oystercatchers and sooty oystercatchers.

Settlements include Whitemark (which has the island's main airstrip and about 155 inhabitants (2011) and Lady Barron (approx. 110 inhabitants), Blue Rocks, Killiecrankie, Wingaroo and Wybalenna (all below Lady Barron's population figure).

All content from Kiddle encyclopedia articles (including the article images and facts) can be freely used under Attribution-ShareAlike license, unless stated otherwise. Cite this article:
Flinders Island Facts for Kids. Kiddle Encyclopedia.