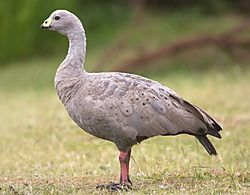 Cape Portland (indigenous name: Lumaranatana) is both a geographical feature and a locality near the north-eastern tip of Tasmania, Australia. It points west across Ringarooma Bay. It was named after the Duke of Portland by Matthew Flinders during his 1798 circumnavigation of the island in the sloop Norfolk with George Bass.

Cape Portland Post Office opened on 6 April 1865 (first as a receiving house) and finally closed in 1918.

It is the site of the 67 km2 Cape Portland Important Bird Area which includes the cape itself, some adjacent land, a strip of coastline east of the cape extending to Policemans Point at the mouth of Ansons Bay, and nearby Swan Island. This area supports more than 1% of the world population of the Cape Barren goose, chestnut teal and the near threatened hooded plover. It also occasionally supports large numbers of pied oystercatchers, double-banded plovers and breeding fairy terns.

All content from Kiddle encyclopedia articles (including the article images and facts) can be freely used under Attribution-ShareAlike license, unless stated otherwise. Cite this article:
Cape Portland, Tasmania Facts for Kids. Kiddle Encyclopedia.