The Clarke Island (also known by its Indigenous name of Lungtalanana Island), part of the Furneaux Group, is an 82-square-kilometre (32 sq mi) island in Bass Strait, south of Cape Barren Island, about 24 kilometres (15 mi) off the northeast coast of Tasmania, Australia. Banks Strait separates the island from Cape Portland on the mainland.

Off its west coast lies the shipwreck of HMS Litherland, which sank in 1853 and was discovered in 1983. Clarke Island is Tasmania's eighth largest island. The island is privately owned by Connor Bradley.

On 28 February 1797, Sydney Cove, en route from Calcutta to Port Jackson, sailed into Banks Strait in strong winds and ran aground between Preservation Island and Rum Island. A party of seventeen men set off on 28 February 1797 in the ship's longboat to reach help at Port Jackson, 400 nautical miles (740 km) away. This was led by first mate Hugh Thompson, and included William Clark the supercargo, three European seaman and twelve lascars. Ill fortune struck again and they were wrecked on the mainland at the northern end of Ninety Mile Beach. Their only hope was to walk along the shore all the way to Sydney, a distance of over 600 kilometres (370 miles).

They had few provisions and no ammunition, and fatigue and hunger lessened their number as they marched. Along the way they encountered various aboriginal people, some friendly and some not. The last of the party to die on the march was killed by a man Dilba and his people near Hat Hill. Those people had a reputation around Port Jackson for being ferocious. Matthew Flinders and George Bass had feared for their safety when they encountered Dilba the previous year.

In May 1797 the three survivors of the march, William Clark, sailor John Bennet and one lascar had made it to the cove at Wattamolla and, on 15 May 1797, with their strength nearly at an end they were able to signal a boat out fishing, which took them on to Sydney.

On the march Clark had noted coal in the cliffs at what is now called Coalcliff between Sydney and Wollongong. This was the first coal found in Australia. On arrival at Port Jackson, the men informed Governor Hunter of the Sydney Cove and its remaining crew. Hunter despatched the Francis and the Eliza to salvage the ship and take the remaining crew and cargo to Port Jackson.

On the first salvage trip, the crew of the Francis discovered wombats on the island and a live animal was taken back to Port Jackson. Matthew Flinders travelling on board the Francis on its third and final salvage trip also decided to take a wombat specimen from the island to Port Jackson. Governor Hunter later sent the animal's corpse to Joseph Banks at the Literary and Philosophical Society to verify it as a new species. The island was named Clarke island after William Clark 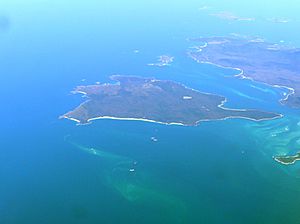 Aerial view of Clarke Is from south east

The root fungus pathogen, Phytophthora cinnamomi, known to be able to kill Australian native plants was found in the island in an isolated case, in 2002.

On 10 May 2005, the government released Crown lands on both Cape Barren and Clarke Island to be overseen by the local Aboriginal association. This marked the first official handover of Crown land to an Aboriginal community in Tasmania. As of 2009[update], Clarke Island had one permanent resident. Current infrastructure is limited and ageing.

A prominent feature of Clarke Island is a central plateau that rises 110 metres (350 ft). This inland highland provides a limited water catchment from which water flows directly to the sea. The highest elevation point is 206 metres (676 ft), located on a northwestern point of the island.

All content from Kiddle encyclopedia articles (including the article images and facts) can be freely used under Attribution-ShareAlike license, unless stated otherwise. Cite this article:
Clarke Island (Tasmania) Facts for Kids. Kiddle Encyclopedia.