Cape Barren Island (indigenous name: Truwana), part of the Furneaux Group, is a 478-square-kilometre (185 sq mi) island located in the Bass Strait, off the north east coast of Tasmania, Australia. The largest island of the Furneaux Group, Flinders Island, lies to the north, with the smaller Clarke Island to the south. The highest point on the island is Mount Munro at 715 metres (2,346 ft). Mount Munro is probably named after James Munro (c. 1779-1845), a former convict and then sealer, who lived from the 1820s for more than 20 years with several women on nearby Preservation Island.

The south-eastern point of the island was named Cape Barren by Tobias Furneaux in HMS Adventure in March 1773.

The population of the island numbered 268 in 2006, most of them in the settlement Cape Barren Island, also called The Corner, on the northwest coast.

Australia's only native goose, the Cape Barren goose, was first documented by European explorers on this island.

Today the residents of Cape Barren Island consist of an Aboriginal community of approximately 70 people. Most of the residents are descended from a community of mixed descent (European and Aboriginal people) who had originally settled on several smaller nearby islands but relocated to Cape Barren Island in the late 1870s. The Colonial Government of Tasmania established a formal reserve in 1881 and commenced providing basic social services to the community. By 1908 the population had grown to 250 people. 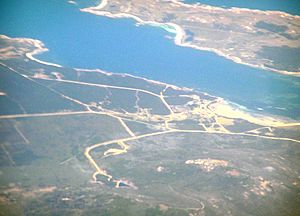 More active government intervention began in 1912 with the passage of the Cape Barren Act. The stated purpose of this act was to encourage the community to become self-sufficient through both incentives and disincentives. Government visits throughout the 1920s and 1930s reported poor health and education and proposals were made to remove children from their parents, ostensibly for their own benefit. Under threat of losing their children many families relocated to mainland Tasmania. By 1944 the population had fallen to 106. From the 1950s the government did indeed remove children from their parents. This forced removal of children was part of a wider policy implemented in many parts of Australia and over a number of decades that resulted in the phenomenon known as the 'stolen generations'. From the 1970s a series of changed government policies were implemented that provided increasingly greater recognition of the personal and social rights of individuals.

On 10 May 2005, the government released Crown lands on both Cape Barren and Clarke Island to be overseen by the local Aboriginal association. This marked the first official handover of Crown land to an Aboriginal community in Tasmania.

On 16 November 1982, the east coast lagoons were recognised as being wetlands of international importance by being designated Ramsar site no.256. The site comprises a 4,370-hectare (10,800-acre) complex of shallow, saline lagoons among stretches of coastal dunes and beaches. It supports various plants of special botanical interest, including nationally rare species, as well as many waterbirds.

From Flinders Island, Cape Barren island is only a short boat trip away. Cape Barren, with the other islands in the Furneaux Group, are a popular destination for sea kayakers who attempt the crossing of Bass Strait from the Australian mainland at Wilsons Promontory, Victoria to the Tasmanian mainland.

All content from Kiddle encyclopedia articles (including the article images and facts) can be freely used under Attribution-ShareAlike license, unless stated otherwise. Cite this article:
Cape Barren Island Facts for Kids. Kiddle Encyclopedia.