The white-fronted tern (Sterna striata) also known as Tara, Sea Swallow, Black-billed Tern, Kahawai Bird, Southern Tern, or Swallow tail, was first described by Johann Friedrich Gmelin in 1789. A medium sized tern that has an all white body including under wing and forked tail, with grey hues that flow over the upper wing. In breeding adults a striking black cap covers the head from forehead to nape, leaving a small white strip across the top of the black beak.

They are the most abundant tern in New Zealand, observed feeding on shoaling fish along the entire coastline and many of its smaller outlying islands. Breeding occurs October to January on rocky cliffs, offshore islands and along the coast where they will nest on shingle, sand, shell or rock. Flocks can have hundreds of breeding pairs that will nest in close proximity to one another. Large numbers of juveniles and some adults migrate to the south-east coast of Australia and parts of Tasmania in the Autumn, with small numbers establishing breeding colonies on Flinders and Cape Barren Islands in the Bass Strait.

Due to introduced mammalian predators into New Zealand such as ferrets and stoats, the white-fronted tern has recently been given the New Zealand national conservation status of at risk/in decline. 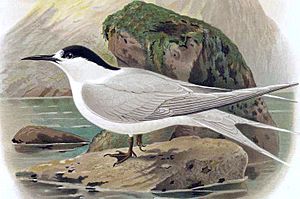 Illustration of Sterna striata from A History of the Birds of New Zealand, Buller,1888

White-fronted terns are described as an average-sized bird, their dimensions are 35–43 cm (14–17 in) in length, with a wingspan that is between 79 and 82 cm (31 and 32 in) and weighing on average 130 g (4.6 oz). Females are marginally smaller, but it is difficult to determine when observing them in the wild.

Breaking down their monochromatic colouring, the white-fronted terns lightest features are its all-white body, tail and underwing. With their upper wings taking on a light silvery grey hue. Through the breeding season there can be a faint pink colouration on the breast, but it is not always visible. The darkest features consist of their beak, black cap, eyes, feet and the shadowing on the outermost edge of the wingtips. The long ebony like beak is slender and comes to a sharp point that dulls in colour at the tip. It meets at a head covered with a jet-black cap that varies in distance from the crown to the beak, while never joining leaving a white band across the lower forehead. The cap continues over the crown and finishes at the nape, inky black round eyes sit within the cap. The legs are stumpy with a deep burgundy black tone. A defining feature of the white-fronted tern is their forked tail, that is recognisable when in flight and commonly draw comparisons with a swallow's tail. In the breeding season, the outermost feathers of the tail lengthen, exaggerating the already profoundly forked tail.

The black cap of non-breeding adults' retreats towards the top of the forehead and above the eyes, while at the same time losing some of its intensity. Immature white-fronted terns appear similar but have speckles of white through the cap. Along with slight colouration through the wings and tail, which appear as a brownish cream. While the juvenile's plumage makes them very pronounced with flickers of light to dark greys and warm milky browns in the upper wing, back, and mantle. The cap is incomplete and mottled while having dark black markings at front and back of eyes.

New Zealand and Australia. Juveniles will occasionally migrate across to south-east Australia and the Northern parts of Tasmania. Breeding populations in Australia are only observed in the Bass Strait, on Flinders and Cape Barren Islands.

White-fronted terns are the most abundant tern to inhabit New Zealand and live along the entire coastline. In the North Island, there are significant populations from Auckland to Bay of Plenty including the Coromandel Peninsula and they are prevalent along the coast from Wellington, up towards Manawatu. While in the South Island, they are a familiar sight in Marlborough sounds and along the eastern coast into Canterbury, Otago and Southland where they can be seen year-round. Stewart Island also has flocks and breeding pairs throughout the year. Apart from the main coastline of New Zealand they also populate many of the smaller islands, with large numbers of breeding pairs observed on both Chatham and Auckland Islands. They seldom head inland, but there have been recordings of them in the Canterbury area, where they travel up the large braided rivers to feed and nest.

The courtship between white-fronted terns begins in early October when the warmth of spring has arrived and can continue into January, with individuals constantly arriving at various breeding grounds. Individual males will fly in from sea with a fish delicately held in its beak; they fly above groups of females and attempt to gain their attention by calling to them. The male may land and strut around with head and fish held high to garner more attention from potential mates and there may be a suggestive approach by female/s to have the fish fed to them. But at this point, the male will swiftly take flight closely followed by one or more of his potential mates. The spectacle continues until there remains only one follower. The pair will land together, the male may offer the fish to the female in acceptance of courtship, or he may disapprove of the female and have the fish for himself. If accepted, the partnership begins. They take to the air together following one another in a magnificent display of flight, to signify their courtship together. White-fronted tern are monogamous, so will stay together for the entire breeding season.

In a short time after courtship, the pair will choose a spot for their nest. No real effort goes into building their nests, it can be directly onto the natural ground or rocky area. It can already have a nest-like shape to it, but sometimes small stones can be brought in to furnish the bottom of the hollows. Nests are tightly packed together, sometimes with less than a meter between them. When in large flocks they can be amongst hundreds of other nests. Flocks are synchronised when laying, with large numbers laying on the same day. Some variations occur and are due to the age of the adults, with older birds laying earlier in the season. They will lay 1–2 eggs and in some rare occasions, 3. The brown speckled eggs vary in pale base colour, that can range from green, blue to browns. The size of the egg/s is on average 46 × 33 mm. They are cared for by both male and female, with an incubation period of approximately 24 days. Adults will continue to join the flock and lay eggs from October–January. 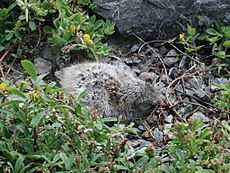 Colouring of chicks is highly variable. They can be a combination of greys, browns, whites and blacks with a speckled and fluffy appearance. Chicks will remain in the nest and be brooded by both adults for several days. It can be up to a week before the chicks leave the nest and join others in a crèche, here they have protection with more substantial numbers while adults are away foraging for food. During the season when a chick is lost to a predator or natural event, more clutches will be laid. Adults will likely only raise one chick to fledging, even if there are two eggs laid. Adults will care for their chick for 29-35 days, at which point they become a fledging. Through this time, there is substantial growth with wings and body in similar size to the adults. The young gain the ability to fly during this time, and they will start to venture out with the adults away from the colony; still being fed by the adults for up to 3 months. 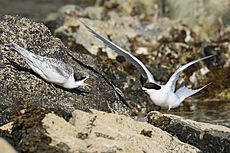 After the fledgling phase, there is a partial moult where they gain some of their juvenile plumage. This occurs through March-April and continues till June-July. Most juveniles will stay with their flock along New Zealand coastlines with no migration. However, in autumn large numbers of juveniles and some adults migrate across the Tasman Sea, arriving on the south-east coast of Australia. Where they become a common site from May to November before returning to New Zealand. Over the next two years, there will be moulting phases alongside the breeding adults, first pre-breeding (May–August), first post-breeding (January–August) and second pre-breeding (May–August). They are slowly gaining adult plumage through each moult and by the second pre-breeding moult they appear similar to adults. After two years, they have matured enough to breed. However, it is a rare occurrence and is more common for adults to start breeding at 7 years old.

Adults can live beyond 18 years of age with a record of one reaching 26 years. Adults will moult twice a year, post-breeding which occurs over 6 months from January to early August and pre-breeding that starts around May/June, finishing in July/August. Pre-breeding moult is where the adult's black cap will extend further down the forehead, leaving only the small band of white across the top of its beak. 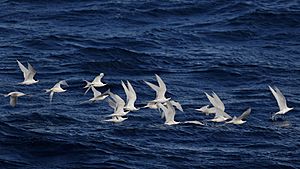 White-fronted terns are carnivorous, fishing mainly in coastal waters. However, on the odd occasion they will head inland a few kilometres, following rivers and creeks to find food. Their diet is predominantly smaller fish such as smelt and pilchards while also including larval fish. Their preference when feeding at sea is for shoaling fish, that are being forced to the surface in large groups by kahawai and kingfish. When feeding, they will dive from 3 to 10 m above the surface into the shoal of fish, just entering the water in a very shallow dive. They can feed like this off the coast in huge flocks that are made up of hundreds to thousands of birds. They will feed alongside other birds such as gannets, shearwaters and gulls. When diving for fish, they are highly efficient. Their forked tails and adept flying skills allow for great movement above the water surface.

As of 2016, the conservation status of white-fronted tern is at risk/in decline. Even with a large population, there is a predicted decline in the coming years. Numbers are falling due to predation by several introduced mammalian species. Adults are attacked and killed by cats, mustelids, ferrets and stoats. These same predators will also target the eggs and chicks, while rats and hedgehogs put further pressure on white-fronted tern by going for eggs and chicks exclusively. Despite living and breeding in groups with large numbers that are tightly packed together, it seldom offers them any extra protection from the intruding attackers.

Red-billed gulls and black-backed gulls are the only native species that will prey on white-fronted tern, though they only go for eggs and chicks. They often nest near the white-fronted tern, which may be a contributing factor for this behaviour. Skuas are also well known to attack them in the air as they return from the sea with fish. They will intimidate them while flying until they drop the fish and catch it before losing it to the sea.

A very dull "crek" is used in courtship when the male is flying above groups, individuals may respond with the same noise. When descending upon intruders, they will let out a continuous "keark". Generally calling between individuals is a high-pitched "siet" used frequently during flight, it will be repeated over and over in particular intervals.

White-fronted terns have a reputation for being difficult to monitor and study due to their unpredictable nature. It becomes very apparent in the breeding season, as white-fronted terns seldom return to the same breeding sites year after year. Making it difficult for a clear indication of numbers and breeding results.

All content from Kiddle encyclopedia articles (including the article images and facts) can be freely used under Attribution-ShareAlike license, unless stated otherwise. Cite this article:
White-fronted tern Facts for Kids. Kiddle Encyclopedia.