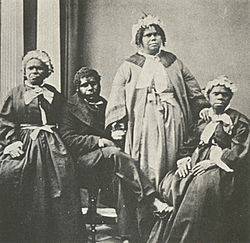 A picture of the last four Tasmanian Aborigines of solely Aboriginal descent c. 1860s. Truganini, the last to survive, is seated at far right.

The Aboriginal Tasmanians (Palawa kani: Palawa or Pakana) are the Aboriginal people of the Australian island of Tasmania, located south of the mainland. For much of the 20th century, the Tasmanian Aboriginal people were widely, and erroneously, thought of as being an extinct cultural and ethnic group that had been intentionally exterminated by white settlers. Contemporary figures (2016) for the number of people of Tasmanian Aboriginal descent vary according to the criteria used to determine this identity, ranging from 6,000 to over 23,000.

First arriving in Tasmania (then a peninsula of Australia) around 40,000 years ago, the ancestors of the Aboriginal Tasmanians were cut off from the Australian mainland by rising sea levels c. 6000 BC. They were entirely isolated from the rest of the human race for 8,000 years until European contact.

Before British colonisation of Tasmania in 1803, there were an estimated 3,000–15,000 Palawa. The Palawa population suffered a drastic drop in numbers within three decades, so that by 1835 only some 400 full-blooded Tasmanian Aboriginal people survived, most of this remnant being incarcerated in camps where all but 47 died within the following 12 years. No consensus exists as to the cause, over which a major controversy arose. The traditional view, still affirmed, held that this dramatic demographic collapse was the result of the impact of introduced diseases, rather than the consequence of policy. Geoffrey Blainey, for example, wrote that by 1830 in Tasmania: "Disease had killed most of them but warfare and private violence had also been devastating." Henry Reynolds attributed the depletion to losses in the Black War. Keith Windschuttle claimed that in addition to disease, the prostitution of women in a society already in decline, explained the extinction. Many specialists in the history of colonialism and genocide, such as Ben Kiernan, Colin Tatz, and Benjamin Madley state that the Tasmanian decimation qualifies as genocide in terms of the definition set forth by Raphael Lemkin and adopted in the UN Genocide Convention.

By 1833, George Augustus Robinson, sponsored by Lieutenant-Governor George Arthur, had persuaded the approximately 200 surviving Aboriginal Tasmanians to surrender themselves with assurances that they would be protected, be provided for and eventually have their lands returned to them. These "assurances" were false; there is no suggestion that Robinson or Lieutenant-Governor Arthur intended anything else but exile to the Furneaux Islands, and the assurances were given by Robinson in order to facilitate the removal of the Aboriginal people from mainland Tasmania. The survivors were moved to Wybalenna Aboriginal Establishment on Flinders Island, where diseases continued to reduce their numbers even further. In 1847, the last 47 living inhabitants of Wybalenna were transferred to Oyster Cove, south of Hobart. Two individuals, Truganini (1812–1876) and Fanny Cochrane Smith (1834–1905), are separately considered to have been the last people solely of Tasmanian descent.

All content from Kiddle encyclopedia articles (including the article images and facts) can be freely used under Attribution-ShareAlike license, unless stated otherwise. Cite this article:
Aboriginal Tasmanians Facts for Kids. Kiddle Encyclopedia.