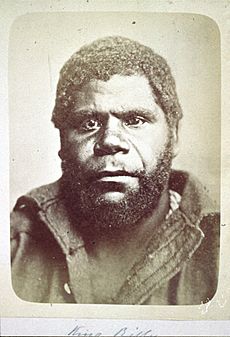 William Lanne (also known as King Billy or William Laney; c. 1835 – 3 March 1869) was a Tasmanian Aboriginal. He is most well known as the last 'full-blooded' Aboriginal Tasmanian man.

In 1842 he was the youngest child in the last family taken to the Aboriginal camp at Wybalenna on Flinders Island by George Augustus Robinson. His native name is lost, probably because at 7 he was too young when arriving at Wybalenna and so the English name William he was given there stuck.

In 1847, he temporarily moved to Oyster Cove, and was sent to an orphanage in Hobart until 1851. In 1855 he joined a whaling ship and regularly visited Oyster Cove when he had time.

Lanne died on 3 March 1869 from a combination of cholera and dysentery.

William Lanne's name is believed to be the source of the "King Billy Pine", or Athrotaxis selaginoides, a native Tasmanian tree whose wood is renowned for its durability to rot and insects.

All content from Kiddle encyclopedia articles (including the article images and facts) can be freely used under Attribution-ShareAlike license, unless stated otherwise. Cite this article:
William Lanne Facts for Kids. Kiddle Encyclopedia.