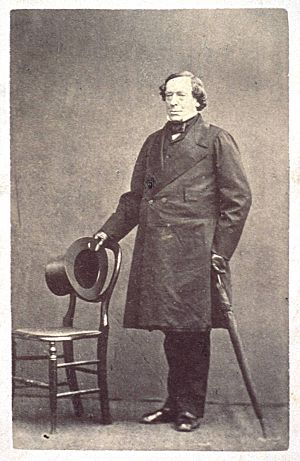 George Augustus Robinson (22 March 1791 – 18 October 1866) was a British builder and untrained preacher. After his arrival in Hobart in 1824, he became known for his attempts to negotiate terms between Aboriginal Tasmanians and the British settlers, during a period known as the Black Wars. He was appointed Chief Protector of Aborigines in Port Phillip District (now Victoria, Australia) in 1839, a post he held until 1849.

Robinson was born on 22 March 1791, probably in London, England, to William Robinson, a builder, and Susannah née Perry. He followed his father into the building trade, married Maria Amelia Evans on 28 February 1814, and had five children over the next ten years. He decided to emigrate to the Australian colonies, and sailed for Hobart Town in Van Diemen's Land on the Triton, where he arrived in January 1824 and set up as a builder. His wife and five children joined him in April 1826. 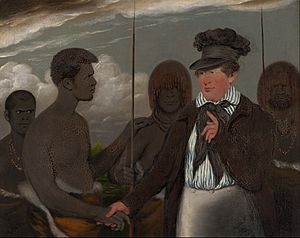 Conflicts between settlers and Aboriginal Tasmanians had vastly increased during the 1820s, which became known as the Black War. In 1830 Robinson investigated the Cape Grim massacre that had occurred in 1828 and reported that 30 Aborigines had been massacred. Robinson was to be brought in as a "conciliator" between settlers and Aboriginal people. His mission was to round up the Aboriginal people to resettle them at the camp of Wybalenna on Flinders Island.

Robinson befriended Truganini, to whom he promised food, housing and security on Flinders Island until the situation on the mainland had calmed down. With Truganini, Robinson succeeded in forging an agreement with the Big River and Oyster Bay peoples, and by the end of 1835, nearly all the Aboriginal people had been relocated to the new settlement.

Robinson's involvement with the Aboriginal Tasmanians ended soon after this, though, and the Wybalenna settlement became more akin to a prison as the camp conditions deteriorated and many of the residents died of ill health and homesickness. Because of this, Robinson's place in history is generally viewed as negative, especially within the current Aboriginal community. Some historians agree that his initial intentions were genuine, but his abandonment of the community is viewed as a turning point for the worse for the Tasmanian Aboriginals. Moreover, his promises of providing a place where Aboriginal people could practise their cultural traditions and ceremonies never came to fruition.

During his decade of service as Chief Protector he made more than 20 expeditions into the four districts of the Aboriginal Protectorate.

Robinson was paid a total of £8000 in his role as protector of Aborigines. He built a small community that included a church and coined the area 'Point Civilisation'. Many of the Aborigines who lived at the port had been removed under false pretenses from their true home in Tasmania.

In 1841 and 1842, Robinson traveled to western Victoria with Tunnerminnerwait where he investigated and reported on the Convincing Ground massacre that had occurred in 1833 or 1834. In 1841 he investigated a gunshot incident, and whilst travelling came across the aboriginal aquaculture site of Lake Condah, recording its dimensions.

The Protectorate was abolished on 31 December 1849 and in May 1852 he returned to England.

His journals are regarded as amongst the most important documents on the early years of European settlement in Victoria. They offer significant observations on Koorie culture, early Melbourne personalities, the landscape and settler society.

In 1853 Robinson married Rose Pyne, they spent the next few years living in Europe before returning to England in 1858. Robinson died on 18 October 1866 in Bath.

Semi-fictional accounts of Robinson's travels are included in Matthew Kneale's book English Passengers and in T. C. Boyle's short story "The Extinction Tales", and Robinson is a major character in Richard Flanagan's 2008 novel Wanting. There is a reference to Robinson in the book "The Lost Diamonds of Killiecrankie" by Gary Crew and Peter Gouldthorpe, and in Following the Equator, by Mark Twain. Robert Drewes' 'Savage Crows' also incorporates the work of Robinson into the plot. See also Mudrooroo's critical portrayal of Robinson in Doctor Wooreddy's Prescription for Enduring the Ending of the World, Master of the Ghost Dreaming and his Vampire Trilogy: The Undying, Underground and The Promised Land. Additionally, Cassandra Pybus' 2020 biography of Truganini, entitled 'Truganini: Journey Through the Apocalypse' provides a detailed account of Robinson's personal relationship with Truganini and the traumatic psychological and cultural shifts experienced by Aboriginal Tasmanians.

Tasmanian artist Julie Gough referenced Robinson and his work in her recent exhibition Tense Past at Tasmania Museum & Art Gallery.

During Robinson's time in Tasmania and Victoria, he collected a large number of objects and artworks from the Aboriginal communities there. After his death, his widow Rose sold the items to many museums. The British Museum has 138 items relating to Robinson's time in Australia, including Aboriginal artefacts, prints and drawings. Joseph Barnard Davis acquired many from Robinson's widow in the 1860s, and it may be through his activities that objects subsequently found their way into other collections, for example at the British Museum. Leeds Discovery Centre has two spears he collected. The Pitt Rivers Museum holds nineteen objects relating to Robinson's time abroad. The collection at Pitt Rivers includes several paintings and prints describing individual people from Aboriginal communities, including: Truggernana, Jenny, and Fanny, amongst others.

All content from Kiddle encyclopedia articles (including the article images and facts) can be freely used under Attribution-ShareAlike license, unless stated otherwise. Cite this article:
George Augustus Robinson Facts for Kids. Kiddle Encyclopedia.