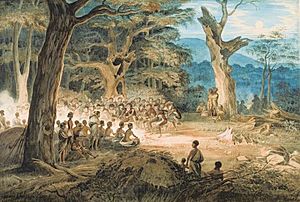 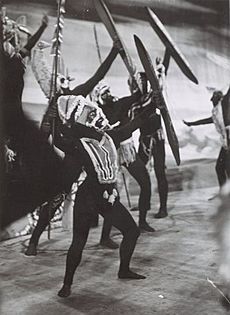 A ballet performance based on the corroboree

A corroboree is a ceremonial meeting of Aboriginal Australians. The word was made by the European settlers of Australia. It was an imitation of the Eora word caribberie. At a corroboree, Aborigines interact with the Dreamtime through dance, music and costume. Many ceremonies act out events from the Dreamtime. Many of the ceremonies are sacred. People from outside a community cannot participate or watch.

All content from Kiddle encyclopedia articles (including the article images and facts) can be freely used under Attribution-ShareAlike license, unless stated otherwise. Cite this article:
Corroboree Facts for Kids. Kiddle Encyclopedia.