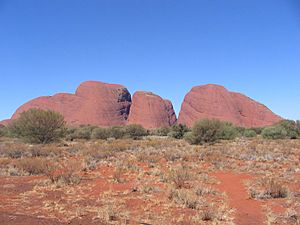 Kata Tjuta in Central Australia. Dreamtime stories say the largest monolith is the home of Wanambi the snake. His breath can be heard in the valleys. 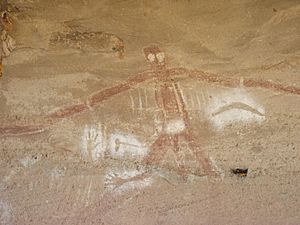 A cave painting in the Hunter Valley. It depicts Baiame, the creator spirit who comes from the sky in the Dreaming of several language groups of southeastern Australia.

In Australian Aboriginal culture, life is based on a foundation of beliefs which are called the Dreamtime, or The Dreaming. This a complex set of ideas with deep levels of meanings. The Dreamtime has four parts: The beginning of everything; the life and power of the ancestors; the way of life and death; and power in life. Dreamtime was all four of these things at the same time because it is more powerful than time and space. In it all things exist at once. The Aboriginal peoples call Dreamtime the all-at-once time because they think it is the past, present, and future at the same time. It is a beginning that has no end.

They meet The Dreamtime by doing special dances and singing special songs. Aboriginals believe that people have a part of them that will live forever. This part existed before a person was born and will exist after they die. It exists in The Dreamtime.

All Australian Aboriginals believe in the Dreamtime. Each group and each person has their own stories and traditions. In Central Australia, the Pitjantjatjara call it the Tjukurpa. The Tjukurpa provides the answers for questions about life. It also gives the rules for behaviour and how to live together. It explains the complex relationship between the people, animals, plants and the land. It teaches the how and why the land is to be looked after. It provided the information about what could be eaten, the rules of marriage, of growing up and the rituals of death. Some parts of the Dreamtime are only known to those who have inherited the right to the knowledge.

Dreamtime is often used to describe the time before time, or the time of the creation. Most Aboriginals believe that all life is connected to the great spirit ancestors of the Dreamtime. Every hill, water hole, river, the sky, every feature was created in the Dreamtime. The journeys of the ancestors across the country created the landscape, and populated it with plants and animals. These journeys are often told in cycles of stories, songs and dances, known as iwara, or songlines. These great spirit ancestors have not gone, they are still present, even if they can not be seen. The ceremonies of songs and dance keep the people in contact with the spirits. "Without ceremony the land soon dies..."

All content from Kiddle encyclopedia articles (including the article images and facts) can be freely used under Attribution-ShareAlike license, unless stated otherwise. Cite this article:
Dreaming (spirituality) Facts for Kids. Kiddle Encyclopedia.