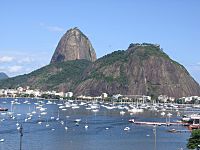 A bornhardt is a big dome-shaped, steep-sided, bald rock formation. They are a kind of inselberg. They are usually made up of granites or gneisses, but can sometimes be found in other rock types like limestone, sandstone and conglomerate. They are named after Wilhelm Bornhardt (1864–1946), the German geologist who first described the feature.

All content from Kiddle encyclopedia articles (including the article images and facts) can be freely used under Attribution-ShareAlike license, unless stated otherwise. Cite this article:
Bornhardt Facts for Kids. Kiddle Encyclopedia.