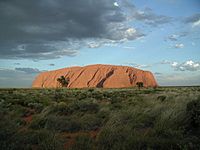 Pitjantjatjara is the name of a nation of native Australian people. They live in the central Australian desert. The people call themselves Aṉangu, a word which means "person" or "people" in their own language. The group is considered part of the Western Desert cultural bloc. Pitjantjatjara people are closely related to their two closest neighbours: the Yankunytjatjara and the Ngaanyatjarra. They can understand much of each other's languages. There are currently about 4,000 people from this nation living in small communities spread out across their homeland.

The homeland of the Pitjantjatjara covers north-western South Australia and the south-west of the Northern Territory. More communities are located a short distance over the border in Western Australia. The land they live in is special to them. It forms a large part of their culture and beliefs. In South Australia, they mostly live in the Aṉangu Pitjantjatjara Yankunytjatjara Lands. This area is where the Pitjantjatjara language is strongest. In the Northern Territory, their country is on the south side of Lake Amadeus. It is centred around Uluṟu and Kata Tjuṯa, two of their most sacred sites.

Pitjantjatara are historically a nomadic people. They lived in small family groups, travelling from one rock hole to another depending on the water and food that was available. In the mid-20th century, most families settled in new communities they built together. They have kept their culture and identity despite outside influences and attempts to force them to change. These influences come from the wider Australian community.

All content from Kiddle encyclopedia articles (including the article images and facts) can be freely used under Attribution-ShareAlike license, unless stated otherwise. Cite this article:
Pitjantjatjara Facts for Kids. Kiddle Encyclopedia.