Kata Tjuṯa, also known as the Olgas, is a group of large, domed rock formations or bornhardts located about 360 km southwest of Alice Springs, in the southern part of the Northern Territory, central Australia. Uluru, also known as Ayers Rock, located 25 km (16 mi) to the east, and Kata Tjuta form the two major landmarks within the Uluru-Kata Tjuṯa National Park. The park is considered sacred to the Aboriginal people of Australia.

The 36 domes that make up Kata Tjuṯa cover an area of 21.68 km2 (8.37 sq mi), are composed of conglomerate, a sedimentary rock consisting of cobbles and boulders of varying rock types including granite and basalt, cemented by a matrix of sandstone. The highest dome, Mount Olga, is 1,066 m (3,497 ft) above sea level, or approximately 546 m (1,791 ft) above the surrounding plain (198 m (650 ft) higher than Uluru). Kata Tjuta is located at the eastern end of the Docker River Road. 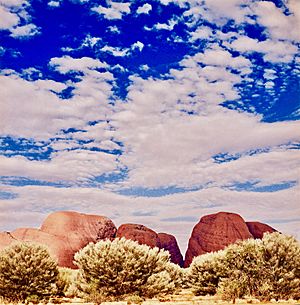 The alternative name, The Olgas, comes from the tallest peak, Mount Olga. At the behest of Baron Ferdinand von Mueller, Mount Olga was named in 1872 by Ernest Giles, in honour of Queen Olga of Württemberg.

On 15 December 1993, a dual naming policy was adopted that allowed official names consisting of both the traditional Aboriginal name and the English name. As a result, Mount Olga was renamed Mount Olga / Kata Tjuṯa. On 6 November 2002, following a request from the regional Tourism Association, the order of the dual names was officially reversed, to Kata Tjuṯa / Mount Olga. 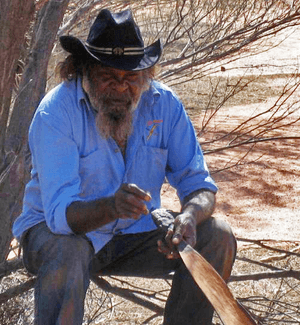 There are many Pitjantjatjara Dreamtime legends associated with this place and indeed everything in the vicinity including Uluru / Ayers Rock. A number of legends surround the great snake king Wanambi, who is said to live on the summit of Kata Tjuṯa / Mount Olga and only comes down during the dry season. His breath was said to be able to transform a breeze into a hurricane in order to punish those who did evil deeds.

The majority of mythology surrounding the site is not disclosed to outsiders, and in particular, women. As is the custom, should women become privy to the "men's business", they are susceptible to violent attacks, even death. The Anangu Aborigines believe the great rocks of Kata Tjuta are homes to spirit energy from the 'Dreaming', and since 1995 the site is being used once again for cultural ceremonies.

Kata Tjuṯa / Mount Olga can be reached via Ayers Rock Airport, followed by a 55-kilometre (34 mi) drive south, then west. Visitors are required to pay an entry fee. Kata Tjuṯa is about 495 kilometres (308 mi) by road from Alice Springs, via the Stuart and Lasseter highways. It is a 4½ hour drive.

All content from Kiddle encyclopedia articles (including the article images and facts) can be freely used under Attribution-ShareAlike license, unless stated otherwise. Cite this article:
Kata Tjuta Facts for Kids. Kiddle Encyclopedia.