As well as its permanent collection, which is especially renowned for its collection of Australian art, AGSA hosts the annual Festival of Contemporary Aboriginal and Torres Strait Islander Art known as Tarnanthi, displays a number of visiting exhibitions each year and also contributes travelling exhibitions to regional galleries. European (including British), Asian and North American art are also well represented in its collections.

The South Australian Society of Arts, established in 1856 and oldest fine arts society still in existence, held annual exhibitions in South Australian Institute rooms and advocated for a public art collection. In 1880 Parliament gave £2,000 to the institute to start acquiring a collection and the National Gallery of South Australia was established in June 1881 with 22 works purchased at the Melbourne International Exhibition, together with others lent by Queen Victoria, the Prince of Wales, the British Government and private collectors. It was opened in two rooms of the public library (now the Mortlock Wing of the State Library), by Prince Albert Victor and Prince George. In 1889 the collection was moved to the Jubilee Exhibition Building, where it remained for ten years. On 6 March 1897 Sir Thomas Elder died, bequeathing £25,000 to the art gallery for the purchase of artworks. The Elder bequest was the first major endowment to any Australian gallery, seven years before the Felton Bequest to the NGV.

In response to the Elder Bequest, the Government commissioned a specially designed building (now the Elder Wing) and pushed ahead with all due speed, to provide employment for skilled tradesmen in a time of economic recession. The building was designed by C. E. Owen Smyth and opened by the Governor, Lord Tennyson on 7 April 1900.

Originally built with an enclosed portico, a 1936 refurbishment and enlargement included a new facade with an open Doric portico.

Major extensions in 1962 (including a three-storey air-conditioned addition on the northern side), 1979 (general refurbishment, in time for its centenary in 1981) and 1996 (large expansion) increased the gallery's display, administrative and ancillary facilities further.

The building is listed in the South Australian Heritage Register.

As of 2019[update], the building houses 64kWh worth of battery storage as part of the Government of South Australia Storage Demonstration project, powered by three 7.5 kW Selectronic inverters. This reduces the consumption of power from the state grid.

The Art Gallery Act 1939 was passed to provide for the control of the library. This has been amended several times since.

From about 1996 until late 2018 Arts SA (later Arts South Australia) had responsibility for this and several other statutory bodies such as the Museum and the State Library, after which the functions were transferred to direct oversight by the Department of the Premier and Cabinet, Arts and Culture section. 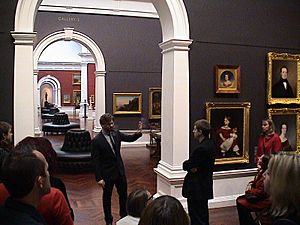 As of May 2019[update], the AGSA collection comprises almost 45,000 works of art. Of the state galleries, only the National Gallery of Victoria is larger. It attracts about 512,000 visitors each year.

Lindy Lee's 6-metre (20 ft) sculpture "The Life of Stars" is mounted on the forecourt of the gallery, after being presented for the 2018 Biennial, Divided Worlds. Created in Shanghai in 2015, the sculpture's polished stainless steel surface reflects its surroundings during the day and radiates light at night. Over 30,000 perforated holes individually placed by Lee resemble a map of our galaxy when lit from within. The sculpture was bought by the gallery as a farewell gift for departing director Nick Mitzevich in April 2018.

The Gallery became the first Australian gallery to acquire a work by an Indigenous artist in 1939, although systematic acquisition of Aboriginal and Torres Strait Islander art was not realised until the mid-1950s. The Gallery and now holds a large and diverse collection of older and contemporary works, including the Kulata Tjuta collaboration created by Aṉangu artists working in the north of SA.

There is a large collection of British art, including many Pre-Raphaelite works, by artists Edward Burne-Jones, William Holman Hunt, Dante Gabriel Rossetti and Morris & Co.. Other works include John William Waterhouse's Circe Invidiosa (1892) and The Favourites of the Emperor Honorius (c.1883); William Holman Hunt's Christ and the Two Marys (1847) and The Risen Christ with the Two Marys in the Garden Of Joseph of Aramathea (1897); and John Collier's Priestess of Delphi (1891). Works by British portrait painters include Robert Peake, Anthony van Dyck, Peter Lely and Thomas Gainsborough.

The Asian art collection, begun in 1904, includes work from the whole region, with focuses on the pre-modern Japanese art, art of Southeast Asia, India and the Middle East. The Gallery holds Australia's only permanent display of Islamic art.

As well as its permanent collection, AGSA hosts the Adelaide Biennial of Australian Art, displays a number of visiting exhibitions each year and contributes travelling exhibitions to regional galleries.

The Adelaide Biennial is "the only major biennial dedicated solely to presenting contemporary Australian art", and also the longest-running exhibition featuring contemporary Australian art. It is supported by the Australia Council and other sponsors. It is presented in association with the Adelaide Festival and staged by AGSA and partner gallery the Samstag Museum, as well as other venues such as the Adelaide Botanic Garden, Mercury Cinema and JamFactory.

The Adelaide Biennial was established in 1990, planned to coincide with Artist's Week, which had commenced in 1982 to help counter the poor coverage of visual art in the Adelaide Festival of Arts programme at that time. The Art Gallery of New South Wales introduced an exhibition of Australian art called Australian Perspecta in 1981, which ran in alternate years with the international Biennale of Sydney, in response for the need for more forums focussing on Australian art. In its first iteration in 1990, The Adelaide Biennale set out to emulate the Whitney Biennial of American art in New York City, and was intended to complement the Sydney Biennale and the Australian Perspecta exhibitions. Then director Daniel Thomas said that they had introduced the Biennial to keep Australia up to date: the Festival attracts international and interstate visitors and it was a good time to introduce contemporary Australian art to this audience. Artists such as Fiona Hall, whose work is now in the National Gallery of Art, were showcased at the first Biennial. The exhibition today still projects Thomas' vision, with the most noticeable difference being that the current version has a theme and a catchy title.

The 2014 Biennial was titled "Dark Heart", an examination of changing national sensibilities, mounted by director Nick Mitzevitch, with 28 artists exhibiting.

In 2016, the gallery participated in the large "Biennial 2016" art festival with its "Magic Object" exhibitions.

In 2018, the title was "Divided Worlds", which aimed "...to describe the divide between ideas and ideologies, between geographies and localities, between communities and nations, and the subjective and objective view of experience and reality itself". Venues included the Museum of Economic Botany in Adelaide Botanic Garden. It drew record crowds, with more than 240,000 people over a 93-day season under curator Erica Green.

Curator for the 2020 Biennial, which was scheduled to run from 29 February to 8 June 2020, is Leigh Robb, inaugural Curator of Contemporary Art appointed in 2016. The title is "Monster Theatres", examining "our relationships with each other, the environment and technology" and featuring a lot of live art. Paintings, photography, sculpture, textiles, film, video, sound art, installation, and performance art by 23 artists are featured, including work by Abdul Abdullah, Stelarc, David Noonan, Garry Stewart and Australian Dance Theatre, Megan Cope, Karla Dickens, Julia Robinson, performance artist Mike Parr, Polly Borland, Willoh S. Weiland, Yhonnie Scarce (whose work In the Dead House was installed in the old Adelaide Lunatic Asylum morgue building in the Botanic Garen) and others. However, AGSA had to temporarily close from 25 March 2020 owing to the COVID-19 pandemic in Australia, so some of the exhibits were shown online, along with virtual tours of the exhibition. When the gallery reopened on 8 June, it was announced that the exhibition period would be extended to 2 August 2020. Some of the exhibits

Since 2015, AGSA has hosted and supported events connected with Tarnanthi (pronounced tar-nan-dee), the Festival of Contemporary Aboriginal and Torres Strait Islander Art. The 2015 exhibition was said to be the "most ambitious exhibition of Aboriginal and Torres Strait Islander art in its 134-year history". In association with the Government of South Australia and BHP, an expansive city-wide festival is staged biennially (in odd-numbered years), alternating with a focus exhibition at the gallery in the years in between.

In 1906, when William Holman Hunt's The Light of the World was on display, 18,168 visitors crammed through the gallery in less than two weeks to see it.

In 2016, a new national $100,000 acquisitive art prize for artists, open to Australian artists under 40 working in any medium, was announced by the Premier of South Australia, Jay Weatherill. Supported by the James & Diana Ramsay Foundation, it is the country's richest art prize, awarded biennially. Chosen by an international judging panel, all finalists are exhibited in a major exhibition over the winter months at the Gallery. There is also a non-acquisitive Lipman Karas People's Choice Prize based on public vote, worth $15,000.

In its inaugural year, over 450 young artists submitted entries. From the 21 finalists selected for the exhibition, Perth-born artist Sarah Contos, now based in Sydney, won the prize for her entry entitled Sarah Contos Presents: The Long Kiss Goodbye. Julie Fragar's 2016 painting Goose Chase: All of Us Together Here and Nowhere, which explores the story of Antonio de Fraga, her first paternal ancestor to emigrate to Australia in the 19th century, won the People's Choice Award.

In 2019, 23 finalists were chosen from a field of 350 submissions. Vincent Namatjira won the main prize with his work Close Contact, 2018, a double-sided full-body representation of a man, in acrylic paint on plywood. Winner of the People's Choice Prize was 24-year-old Zimbabwean man Pierre Mukeba (the youngest finalist) for his 3 metres (9.8 ft) by 4 metres (13 ft) painting entitled Ride to Church, inspired by childhood memories of the whole family perched somewhat precariously on a single motorbike to travel to church.

All content from Kiddle encyclopedia articles (including the article images and facts) can be freely used under Attribution-ShareAlike license, unless stated otherwise. Cite this article:
Art Gallery of South Australia Facts for Kids. Kiddle Encyclopedia.