Sir Sidney Robert Nolan (1917—1992) is regarded as one of Australia's great artists. He used many art forms including painting, drawing, printmaking, set design (for theatre), murals, spray painting and collage. He created over 10,000 individual art works.

Nolan was born in Carlton, Victoria on 22 April 1917. He attended Prahran Technical College and studied art at the National Gallery School in Melbourne. In 1948 he moved to Sydney, New South Wales and then in 1953 he moved to London where he stayed until his death on 28 November 1992. 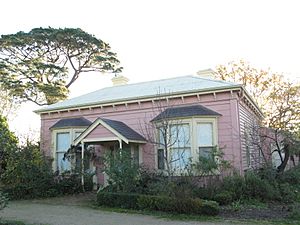 Heide, where Nolan painted the majority of his early Ned Kelly works

Nolan painted a wide range of personal interpretations of historical and legendary figures, including explorers Burke and Wills, and Eliza Fraser.

Probably his most famous work is a series of stylised descriptions of the bushranger Ned Kelly in the Australian bush. Nolan's Ned Kelly series follow the main sequence of the Kelly story. However Nolan did not intend the series to be an authentic depiction of these events. The Kelly saga was also a way for Nolan to paint the Australian landscape in new ways, with the story giving meaning to the place.

Nolan never relied upon one style or technique, but rather experimented throughout his lifetime with many different methods of application, and also devised some of his own.

Nolan was inspired by children's art and modernist painting of the early 20th century. 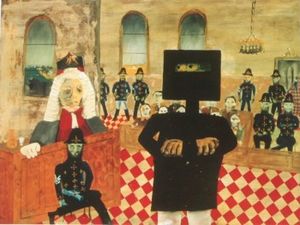 The Trial, held at the National Gallery of Australia, is one of 27 paintings comprising Nolan's 1946–47 Ned Kelly series.

Nolan's Ned Kelly series is one of the greatest sequences of Australian paintings of the 20th century. His simplified depiction of Kelly in his armour has become an iconic Australian image. In 1949, when the series was exhibited at the Musée National d'Art Moderne in Paris, the museum's director Jean Cassou called the works "a striking contribution to modern art" and that Nolan "creates in us a wonder of something new being born". Works from Nolan's second Kelly series (ca. mid-1950s) were acquired by major international galleries, including the Museum of Modern Art in New York and the Tate Modern in London. English critic Robert Melville wrote in 1963 that Nolan's Kelly belonged to "the company of twentieth-century personages which includes Picasso's minotaur, Chirico's mannequins, Ernst's birdmen, Bacon's popes and Giacometti's walking man".

Paintings of Dimboola landscapes by Sidney Nolan, who was stationed in the area while on army duty in World War II, can be found in the National Gallery of Victoria.

In 1951, Nolan moved to London, England. He travelled in Europe, spending a year in 1956 painting themes based on Greek Mythology while in Greece.

In 1965, Nolan completed a large mural (20 m by 3.6 m) depicting the 1854 Eureka Stockade, rendered in enamelled jewellery on 1.5 tonnes of heavy gauge copper. Nolan employed the "finger-and-thumb" drawing technique of Indigenous Australian sandpainters to create the panoramic scene. Commissioned by economist H. C. Coombs, the mural is located at the entrance to the Reserve Bank of Australia's Melbourne office on Collins Street.

During the period of 1968-1970, Nolan embarked on the creation of a monumental mural entitled Paradise Garden. This project consisted of 1,320 floral designs split into three subsections that were created using crayon and dyes. The intent of the subsections was to show the lifecycles of the plants, starting with the primeval plants emerging from the mud, transitioning to their full burst of colour in springtime, and the completion of the life cycle with the withering plants returning to the earth.

In England, Nolan attended the Aldeburgh Festival and become influenced by the organiser and composer Benjamin Britten, exhibiting paintings at the festivals. He continued to travel widely in Europe, Africa, China, Australia, and even Antarctica.

Nolan died in London on 28 November 1992 at the age of 75, he was survived by his wife and two children. He was buried in the Eastern part of Highgate Cemetery, London. 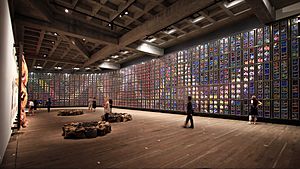 The Museum of Old and New Art in Hobart, Tasmania was built to accommodate Nolan's Snake (1970–72), a giant Rainbow Serpent mural made of 1,620 individual paintings.

Nolan's lifelong engagement with the theatre began in 1939 when he was commissioned to create décor for French ballet dancer Serge Lifar's revised version of Icare. Lifar, then on tour in Australia with the Original Ballet Russe, offered Nolan the job after a chance encounter with his abstract work. Icare premiered on 16 February 1940 at the Theatre Royal in Sydney.

In 1964, Robert Helpmann enlisted Nolan to design the set and costumes for his ballet The Display. Set at a bush picnic, the piece relates the mating rituals of the lyrebird to the masculine posturing of Australian males. Nolan created a series of green-blue gauze panels to evoke the filtered light of the forest.

In 1963, Nolan was appointed CBE. In 1981, Nolan was appointed a Knight Bachelor for service to art, despite his war desertion. He received the Order of Merit (OM) in 1983. In 1983, Nolan settled in Herefordshire. The Sidney Nolan Trust, chaired by Lord Lipsey, was established in 1985 to support artists and musicians, and provide exhibition space for works by Nolan and others at The Rodd, north of Kington, Herefordshire.

He was made a Companion of the Order of Australia (AC) in 1988 having declined being made an Officer in 1975. In 1975, Sir John Kerr, the then Governor-General, wrote to the Queen's then Private Secretary, Sir Martin Charteris, to inform him of Nolan's decision to decline. Kerr indicated in his letter that he thought Nolan should have been offered the rank of Companion instead and that he had intended to convey his view to Sir Garfield Barwick, the inaugural Chair of the Order of Australia Council, but that Barwick had already sent Nolan the letter asking whether Barwick would decline the honour of AO. Kerr speculated to Charteris that, having been made CBE in the 1960s, being made an AO, "...may have seemed to him no great advancement."

Detail of the three-dimensional frieze at the base of the Nolan apartment building in Docklands, Melbourne, inspired by Nolan's abstracted depiction of Ned Kelly's helmet and the Australian landscape

During the Tin Symphony segment of the 2000 Summer Olympics opening ceremony, a multitude of performers donned stylised costumes based on Nolan's distinctive Ned Kelly imagery, and a painting from Nolan's original 1946-47 Ned Kelly series was displayed on a giant screen in the stadium.

In 2010, First-class Marksman (1946) became the most expensive Australian painting ever sold. Dubbed "the missing Nolan", the painting was the only one in Nolan's first series of 27 Ned Kelly paintings not in the collection of the National Gallery of Australia. It was purchased by the Art Gallery of New South Wales for $5.4 million.

The cinematography for English film director Nicolas Roeg's 1971 Australian film Walkabout was heavily influenced by Nolan. The small boy's hallucination of camel riders in the desert was a direct reference to Nolan's Burke and Wills paintings.

Melbourne writer Steven Carroll's 2011 novel Spirit of Progress is inspired by Woman and Tent (1946) by Nolan, who based the painting on Carroll's eccentric great-aunt. The young artist in the novel, Sam, is based on Nolan. Nolan's relationship with Sunday Reed provided the framework for Alex Miller's 2011 novel Autumn Laing.

David Rainey's 2014 play "The Ménage at Soria Moria" is a fictitious performance piece exploring the relationship between Nolan and the Reeds – both the heady days at Heide during the 1940s, and the less well known degeneration over the next 35 years.

Several documentary films have been made about Nolan. This Dreaming, Spinning Thing was commissioned by ABCTV as a companion film to Nolan's 1967 retrospective exhibition at the Art Gallery of New South Wales. It was made with a script by Australian novelist George Johnston. Kelly Country (1972), directed by Stuart Cooper with commentary by Orson Welles, explores Australia's landscape and folklore through Nolan's imagery. Nolan's Paradise Garden poems and drawings are examined in British director Jonathan Gili's 1974 film of the same name. A 2009 documentary by filmmaker Catherine Hunter, Mask and Memory charts the course of Nolan's personal life, including his complex relationship with the Reeds at Heide. Narrated by Judy Davis, the film concludes that the three main women in Nolan's life, Sunday Reed, Cynthia Nolan and Mary Nolan, played bigger roles in the development of his art than is often discussed.

Among Australian artists, Nolan's estate was identified as the third largest in Australia in 2013, following those of Brett Whiteley and Russell Drysdale.

All content from Kiddle encyclopedia articles (including the article images and facts) can be freely used under Attribution-ShareAlike license, unless stated otherwise. Cite this article:
Sidney Nolan Facts for Kids. Kiddle Encyclopedia.