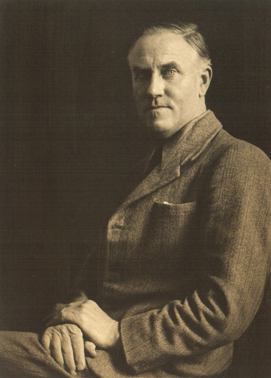 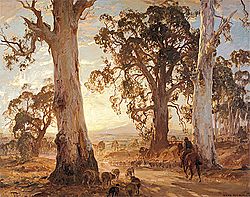 Droving into the Light, 1914-21, Art Gallery of South Australia

Sir Hans Heysen (8 October 1877 – 2 July 1968) was a German-born Australian artist. He became a household name for his watercolours of monumental Australian gum trees. Heysen also produced images of men and animals toiling in the Australian bush, as well as groundbreaking depictions of arid landscapes in the Flinders Ranges. He won the Wynne Prize for landscape painting a record nine times.

Wilhelm Ernst Hans Franz Heysen was born in Hamburg, Germany. He migrated to Adelaide in South Australia with his family in 1884 at the age of 7. As a young boy Heysen showed an early interest in art. At 14 he left school to work with a hardware merchant, later studying art during nights at Art School in his spare time, under James Ashton. He joined the Adelaide Easel Club in 1897 and was immediately recognized as a rising talent.

At age 20 he was sponsored by a group of wealthy Adelaide art enthusiasts H. H. Wigg and brothers-in-law W. L. Davidson, and F. A. Joyner, and miner Charles Henry de Rose to study art for four years in France.

By 1912 Hans Heysen had earned enough from his art to purchase a property called "The Cedars" near Hahndorf in the Adelaide Hills, which remained as his home until his death in 1968 aged 90. Hans Heysen is best remembered for his remarkable paintings depicting sheep and cattle among massive gum trees against a background of stunning atmospheric effects of light.

All content from Kiddle encyclopedia articles (including the article images and facts) can be freely used under Attribution-ShareAlike license, unless stated otherwise. Cite this article:
Hans Heysen Facts for Kids. Kiddle Encyclopedia.