The bush facts for kids 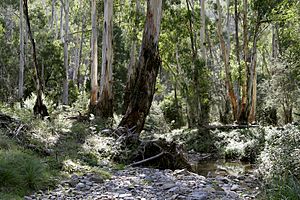 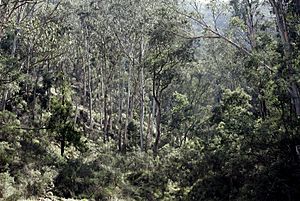 The bush is a phrase used to describe land where people do not live, land a long way from cities, or forests. The word is mainly used in Australia, New Zealand, Africa, Canada, and Alaska.

In Australia, the phrase, the bush, has a special symbolic meaning in Australian life. When used to describe the land, the bush means a wooded area, but not dense forest. It is usually dry and nitrogen-poor soil, mostly grassless, with thin to thick woody shrubs and bushes, with some eucalypt trees.

When talking about people, the bush means any unpopulated areas outside of the major metropolitan areas. This can include mining and farming areas. It is not unusual to have a mining town in the desert, such as Port Hedland, Western Australia (Pop. 14,000) called the bush in the media.

The word bush is also added to any number of other words, things or activities to describe their rural, country or folk nature, e.g. "Bush Cricket", "Bush Music", etc.

The panoramic view from Connors Hill, near Swifts Creek Victoria, showing typical Australian bushland on the hills and cleared pastures

All content from Kiddle encyclopedia articles (including the article images and facts) can be freely used under Attribution-ShareAlike license, unless stated otherwise. Cite this article:
The bush Facts for Kids. Kiddle Encyclopedia.