The Heysen Trail is a long distance walking trail in South Australia. It runs from Parachilna Gorge, in the Flinders Ranges via the Adelaide Hills to Cape Jervis on the Fleurieu Peninsula and is approximately 1,200 kilometres (750 mi) in length.

Due to bushfire risk, large sections of the trail are closed annually from December through to April.

Most people choose to walk sections of the track for one or a few days at a time. There are many places to stay along the trail and hardy walkers who walk the track from beginning to end typically do so in about 60 days.

A regular walking program is conducted by a walking sub-committee. Different grades of walks cater for beginners and for more experienced walkers. 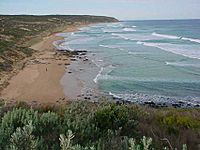 Waitpinga Beach, a part of the southernmost reach of the trail

The trail passes cliffs, farmland, natural bushland, forests, vineyards, and grazing land. It extends from the ocean through the fertile Mount Lofty Ranges across Goyder's Line to the arid Flinders Ranges, with many different bioregions.

The trail was first suggested by Warren Bonython in 1969 but design was stalled by several years due to government politics and issues with private land owners. The first 50 kilometres of the track was laid through the Mount Lofty Ranges in 1978 after responsibility for the track was handed to the Department of Recreation and Sport. Terry Lavender was the main designer for the track and oversaw the majority of its construction until it was completed in 1992.

The trail is named after Sir Hans Heysen.

All content from Kiddle encyclopedia articles (including the article images and facts) can be freely used under Attribution-ShareAlike license, unless stated otherwise. Cite this article:
Heysen Trail Facts for Kids. Kiddle Encyclopedia.