Quorn is a township and railhead in the Flinders Ranges in the north of South Australia, 39 km northeast of Port Augusta. At the 2006 census, Quorn had a population of 1068.

Quorn is the home of the Flinders Ranges Council local government area. It is in the state Electoral district of Stuart and the federal Division of Grey. 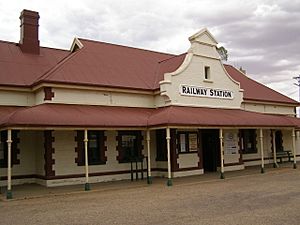 The town was surveyed by Godfrey Walsh in 1878 and named after Quorndon in Leicestershire, United Kingdom, as part of the preparations for building the railway line from Port Augusta northwards.

The railway line from Port Augusta to Quorn opened in 1879 and was subsequently extended north to Government Gums (Farina) in 1882, Marree in 1884, Oodnadatta in 1890 and Alice Springs in 1929. This railway line later became known as the Great Northern Railway and later the Central Australia Railway.

In 1917, Quorn became the crossroads of any north–south (on the Central Australian Railway to Oodnadatta) or east–west travel in Australia, when the Trans-Australian Railway was completed between Port Augusta and Kalgoorlie. This made Quorn an important town, given that any person travelling east–west or north–south in Australia would need to pass through Quorn. As a result, many fine buildings were built as the town expanded.

Quorn's role as a crossroads was lost when a standard gauge railway connection was opened between Port Pirie Junction and Port Augusta in 1937, meaning east–west trains bypassed Quorn. However, during World War II, Quorn was a vital service point for trains heading north to Alice Springs and carried over 1,000,000 troops heading to Darwin and on to Papua New Guinea. Trains services through Quorn peaked at over 50 per day during and immediately after the period of World War II. Services during this time also included coal mined at Leigh Creek being moved to the newly opened Playford A Power Station in Port Augusta.

During the 1950s a new standard gauge line was built that passed on the western side of The Dutchmans Stern, Mount Arden and Mount Eyre, from Stirling North to Brachina and then roughly following the original narrow gauge route through Leigh Creek and to Marree, thus bypassing Quorn. This bypass took away the last railway traffic through the Pichi Richi Pass, and the last major freight traffic through Quorn. The only services left operating through Quorn were freight between Peterborough and Hawker. As a result, Quorn's importance diminished and eventually in 1980s the railway was completely closed as the last freight was moved to road transport. One unusual aspect of the railway working from Peterborough to Quorn and then on to Hawker was the need for the engine to be turned and attached to the opposite end of the train when arriving at Quorn, as it was not a "through" station for the trip from Peterborough to Hawker. 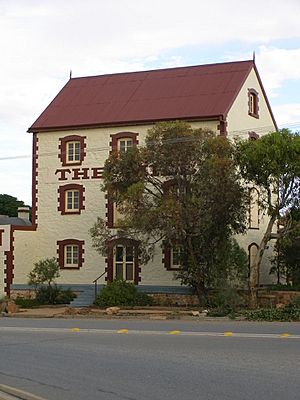 A main attraction in Quorn is the Pichi Richi Railway. There are also a self-guided walking tours in the town, included several based around the town's historic old buildings, the railway yards and other historic locations. The Flinders Ranges Visitor Information Centre / Pichi Richi Railway in the Quorn railway station provide visitor information, bookings for the railway, accommodation, tours and souvenirs.

There are a number of restaurants, bistro and cafes in town: at the four hotels on Railway Terrace,(Transcontinental, Austral, Criterion and Quorn Hotels) Emily's Bistro, Quorn Café, Quandong Café, the Willows Brewery Restaurant, 10 km out of Quorn on the road to Port Augusta.

The Heysen Trail and the Mawson Trail, pair of long distance trails dedicated respectively to walking and cycling, pass through town and there are many bushwalks and 4wd tracks.

Quorn is home to country music artist Jedd Hughes, and was the birthplace of politician Brian Harradine and champion SANFL footballer Fos Williams. Former Australian of the year and AC, CBE, Lowitja O'Donoghue also spent a huge portion of her childhood at the Aboriginal mission in Quorn, Colebrook Children's Home.

Quorn is a stopover for many travellers coming via Adelaide to explore the Flinders Ranges. The tourist office on the main street, manned by volunteers every week day, provides free information, maps and trails to safely see the best sites in the Flinders, including Warren Gorge, Kanyaka Station, Proby's Grave and Itali Itali.

Quorn has also been used in several major films, including The Shiralee, Sunday Too Far Away, Gallipoli, Wolf Creek, The Sundowners, The Lighthorsemen and most recently The Last Ride starring Hugo Weaving.

Quorn has a number of heritage-listed sites, including:

All content from Kiddle encyclopedia articles (including the article images and facts) can be freely used under Attribution-ShareAlike license, unless stated otherwise. Cite this article:
Quorn, South Australia Facts for Kids. Kiddle Encyclopedia.