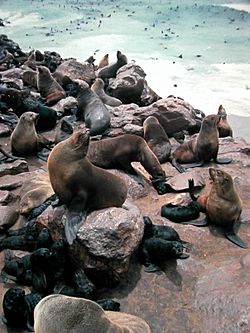 one of the nine species, Arctocephalus pusillus

Fur seals are any of nine species of pinnipeds belonging to the Arctocephalinae subfamily in the Otariidae family.

They are much more closely related to sea lions than true seals, and share with them external ears (pinnae), relatively long and muscular foreflippers, and the ability to walk on all fours. They are marked by their dense underfur, which made them a long-time object of commercial hunting. Eight species are found primarily in the Southern Hemisphere, while one ninth species also sometimes called fur seal, the northern fur seal, belongs to a different genus and inhabits the North Pacific.

Fur seals share with other otariids the ability to turn their rear limbs forward and move on all fours. Fur seals are generally smaller than sea lions. At under 1 m (3 ft 3 in), the Galápagos fur seal is the smallest of all pinnipeds. However, their flippers tend to be proportionately longer, their pelage tends to be darker, and their vibrissae are more prominent. Males are often more than five times heavier than the females, making them among the most sexually dimorphic of all mammal groups. 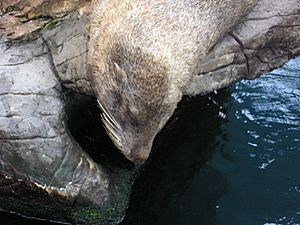 A fur seal at Living Coasts, sunbathing on a rock 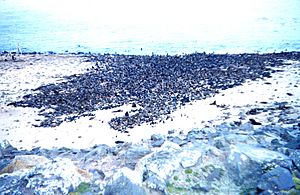 A fur seal rookery with thousands of seals

Typically, fur seals gather during the summer in large assemblages at specific beaches or rocky outcrops to give birth and breed. All species are polygynous, meaning dominant males reproduce with more than one female. For most species, total gestation lasts about 11.5 months, including a several-month period of delayed implantation of the embryo. While northern fur seal males aggressively select and defend the specific females in their harems, males of southern species of fur seals tend to protect spatial territories, and females are free to choose or switch their mates according to their own preferences or social hierarchy. After several continuous days of nursing the newborn pups, females go on extended foraging trips that can last as long as a week, returning to the rookery to feed their pups until they are weaned. Males fast during the reproductive season, unwilling to leave their females or territories.

The remainder of the year, fur seals lead a largely pelagic existence in the open sea, pursuing their prey wherever it is abundant. Fur seals feed on moderately sized fish, squid, and krill. Several species of the southern fur seal also have sea birds, especially penguins, as part of their diets. The fur seals, in turn, are preyed upon by sharks, killer whales, and occasionally by larger sea lions.

When fur seals were hunted in the late 18th and early 19th centuries, they hauled out on remote islands where no predators were present. The hunters reported being able to club the unwary animals to death one after another, making the hunt profitable, though the price per seal skin was low. 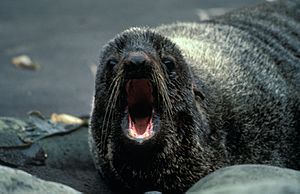 Many fur seal species were heavily exploited by commercial sealers, especially during the 19th century when their fur was highly valued. Beginning in the 1790s, the ports of Stonington and New Haven, Connecticut, were leaders of the American fur seal trade, which primarily entailed clubbing fur seals to death on uninhabited South Pacific islands, skinning them, and selling the hides in China. Many populations, notably the Guadalupe fur seal, northern fur seal, and Cape fur seal, suffered dramatic declines and are still recovering. Currently, most species are protected and hunting is mostly limited to subsistence harvest. Globally, most populations can be considered healthy, mostly because they often prefer remote habitats that are relatively inaccessible to humans. Nonetheless, environmental degradation, competition with fisheries, and climate change potentially pose threats to some populations.

All content from Kiddle encyclopedia articles (including the article images and facts) can be freely used under Attribution-ShareAlike license, unless stated otherwise. Cite this article:
Fur seal Facts for Kids. Kiddle Encyclopedia.