Kids Encyclopedia Facts
This page is about the town. For the borough, see Stonington (borough), Connecticut.

The town of Stonington is located in New London County, Connecticut in the state's southeastern corner. It includes the borough of Stonington, the villages of Pawcatuck, Lords Point, and Wequetequock, and the eastern halves of the villages of Mystic and Old Mystic (the other halves being in the town of Groton). The population of the town was 18,335 at the 2020 census.

The first European colonists established a trading house in the Pawcatuck section of town in 1649. The present territory of Stonington was part of lands that had belonged to the Pequot people, who referred to the areas making up Stonington as Pawcatuck (Stony Brook to the Pawcatuck River) and Mistack (Mystic River to Stony Brook). It was named "Souther Towne" or Southerton by Massachusetts in 1658, and officially became part of Connecticut in 1662 when Connecticut received its royal charter. Southerton was renamed "Mistick" in 1665 and again renamed Stonington in 1666. Thomas Miner, Walter Palmer, William Chesebrough, and Thomas Stanton were the founders. The town of North Stonington was set off as a parish from Stonington in 1724 and incorporated as a town in 1807.

Stonington first gained wealth in the 1790s when its harbor was home to a fleet engaged in the profitable sealing trade in which seals were hunted on islands off the Chilean and Patagonian coasts, and their skins were sold as fur in China.

Stonington repulsed two British naval bombardments. One was a desultory bombardment during the American Revolution by Sir James Wallace in the frigate HMS Rose on August 30, 1775. The other was a more damaging three-day affair between August 9 and 12, 1814 during the War of 1812. British vessels HMS Ramillies, HMS Pactolus, HMS Dispatch, and HMS Terror under the command of Sir Thomas Hardy appeared offshore on August 9, 1814. The British demanded immediate surrender, but Stonington's citizens replied with a note that stated, "We shall defend the place to the last extremity; should it be destroyed, we shall perish in its ruins." For three days, the Royal Navy pounded the town, but the only fatality was that of an elderly woman who was mortally ill. The British sailed off on 12 August after suffering many dead and wounded. American poet Philip Freneau wrote (in part):

The bombardiers with bomb and ball


Soon made a farmer's barrack fall,

And did a cow-house badly maul


That stood a mile from Stonington.


Three hogs they wounded in a pen—

They dashed away and pray what then?


This was not taking Stonington.

But some assert, on certain grounds,


(Beside the damage and the wounds),


To have a dash at Stonington.

The Stonington Harbor Light is a low stone building erected in 1823, and was the first lighthouse established by the U.S. federal government. In the 19th century, Stonington supported a small fishing, whaling, and sealing fleet, with some direct trade with the West Indies — enough in volume for it to be made a port of entry in 1842. The small granite Customs House faces Main Street just north of Cannon Square.

The New London and Stonington Railroad Company was incorporated on July 29, 1852.

The Groton and Stonington Street Railway was a trolley line created in 1904 to serve the Stonington area. The trolley was dismantled and replaced by buses in 1928.

In recent decades, Stonington has experienced a large influx of new home owners using historic borough houses as second homes. The town has undergone a widespread reconditioning of these homes since the mid-1990s, when an altercation over redevelopment rights attracted substantial news coverage about Stonington's revitalization.

In the waters off Stonington, the states of New York, Connecticut and Rhode Island come together at a single point. 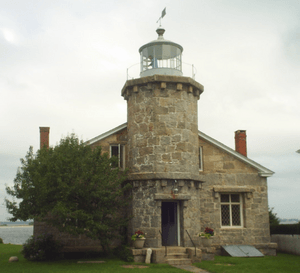 Buildings on the National Register of Historic Places 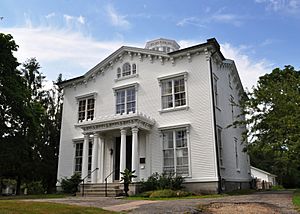 The Capt. Nathaniel B. Palmer House

Stonington has been the home to several on-location movie shoots, including Steven Spielberg's Amistad and the Julia Roberts breakthrough movie, Mystic Pizza. Most recently it was used extensively for the movie Hope Springs with Meryl Streep and Tommy Lee Jones both filming scenes in the borough of Stonington.

All content from Kiddle encyclopedia articles (including the article images and facts) can be freely used under Attribution-ShareAlike license, unless stated otherwise. Cite this article:
Stonington, Connecticut Facts for Kids. Kiddle Encyclopedia.