The Alaska Maritime National Wildlife Refuge (often shortened to Alaska Maritime or AMNWR) is a United States National Wildlife Refuge comprising 2,400 islands, headlands, rocks, islets, spires and reefs in Alaska, with a total area of 4.9 million acres (20,000 km2), of which 2.64 million acres (10,700 km2) is wilderness. The refuge stretches from Cape Lisburne on the Chukchi Sea to the tip of the Aleutian Islands in the west and Forrester Island in the southern Alaska Panhandle region in the east. The refuge has diverse landforms and terrains, including tundra, rainforest, cliffs, volcanoes, beaches, lakes, and streams.

The refuge is divided into five units. Clockwise around Alaska, starting in the southeast, their component territories include: 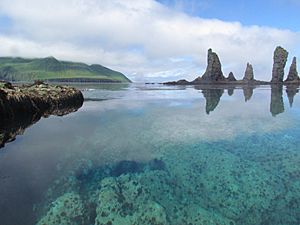 Includes most of the land area of the Aleutian Islands, from Unimak in the east to Attu in the west 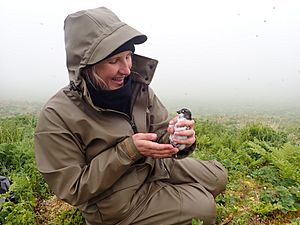 All content from Kiddle encyclopedia articles (including the article images and facts) can be freely used under Attribution-ShareAlike license, unless stated otherwise. Cite this article:
Alaska Maritime National Wildlife Refuge Facts for Kids. Kiddle Encyclopedia.