Bogoslof Island or Agasagook Island (Aleut: Aĝasaaĝux̂) is the summit of a submarine stratovolcano at the south edge of the Bering Sea, 35 miles (56 km) northwest of Unalaska Island of the Aleutian Island chain. It has a land area of 319.3 acres (1.292 km2) and is uninhabited. The peak elevation of the island is 490 feet (150 m). It is 1,040 meters (3,410 ft) long and 1,512 m (4,961 ft) wide. The stratovolcano rises about 6,000 ft (1,800 m) from the seabed, but the summit is the only part that projects above sea level. The island is believed to be relatively new, with the volcano being entirely below sea level before 1796, and most of the presently 300 acre island being formed by eruptions since 1900.

In 1909, President Theodore Roosevelt designated Bogoslof and Fire Island, a sanctuary for sea lions and nesting marine birds. Together, as the Bogoslof Wilderness, they are currently part of the Aleutian Islands unit of Alaska Maritime National Wildlife Refuge. In November 1967, Bogoslof Island was designated a National Natural Landmark by the National Park Service. The Bogoslof Island group was added to the National Wilderness Preservation System in 1970. 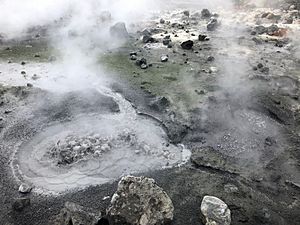 All content from Kiddle encyclopedia articles (including the article images and facts) can be freely used under Attribution-ShareAlike license, unless stated otherwise. Cite this article:
Bogoslof Island Facts for Kids. Kiddle Encyclopedia.