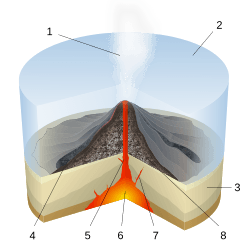 Submarine volcanoes are volcanoes which are under the surface of the world's oceans. These volcanoes occur in a range of forms. Many create cone-shaped seamounts or flat-topped guyots. 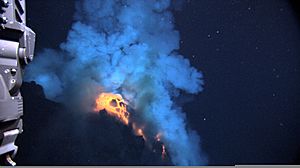 Superheated lava was photographed by a remotely-operated underwater robot at a depth of 4,000+ feet

Volcanoes in the ocean develop from cracks or holes in the earth's undersea surface. Changes in the ocean floor are caused when magma flows or erupts from a site which is under water.

The presence of water alters the characteristics of a volcanic eruption.

All content from Kiddle encyclopedia articles (including the article images and facts) can be freely used under Attribution-ShareAlike license, unless stated otherwise. Cite this article:
Submarine volcano Facts for Kids. Kiddle Encyclopedia.