Chamisso Island is a small island in Kotzebue Sound, Alaska. It is located off Spafarief Bay at the mouth of Eschscholtz Bay, just south of the Choris Peninsula. 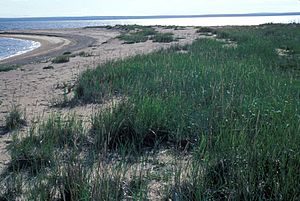 Chamisso Island has been a Natural Reserve since December 7, 1912. The protected area, the Chamisso Wilderness, includes Chamisso Island and nearby Puffin Island, as well as some rocky islets nearby. Both islands are part of the Chukchi Sea unit of the Alaska Maritime National Wildlife Refuge.

This island was named after naturalist Adelbert von Chamisso, who reached the island in 1816.

All content from Kiddle encyclopedia articles (including the article images and facts) can be freely used under Attribution-ShareAlike license, unless stated otherwise. Cite this article:
Chamisso Island Facts for Kids. Kiddle Encyclopedia.