Attu (Aleut: Atan) is the westernmost and largest island in the Near Islands group of the Aleutian Islands of Alaska, and the westernmost point of land relative to Alaska, the United States, North America and the Americas. The island became uninhabited in 2010.

The island was the site of the only World War II land battle fought on an incorporated territory of the United States (the Battle of Attu), and its battlefield area is a U.S. National Historic Landmark.

Attu Station, a former Coast Guard LORAN station, is located at 52°51′N 173°11′E﻿ / ﻿52.850°N 173.183°E﻿ / 52.850; 173.183, making it one of the westernmost points of the United States relative to the rest of the country. However, since it is in the Eastern Hemisphere, being on the opposite side of the 180° longitude line as the contiguous 48 states, it can also be considered one of the easternmost points of the country (a second Aleutian Island, Semisopochnoi Island at 179°46′E, is the easternmost location in the United States by this definition).

As of 1982[update], the only significant trees on the island were those planted by American soldiers at a chapel constructed after the 1943 battle when the Japanese occupation was over.

Although Attu Island is the westernmost body of land east of the International Date Line its time zone is UTC-10, which means that locations to the south-southeast (such as the uninhabited Baker Island and Howland Island in UTC −12 and Niue, Midway Atoll and (formerly) American Samoa in UTC −11) have earlier clocks.

The name Attu is a transliteration of the Aleut name of the island. It was called Saint Theodore by the explorer Aleksei Chirikov in 1742. Attu, being the nearest to Kamchatka, was the first of the Aleutian Islands exploited by Russian traders. The first population estimate by the Russians put at most 175 Aleuts on Attu. However, the large number and size of archeological sites on Attu have led to estimates of 2,000–5,000 inhabitants during the centuries preceding European contact. Russians would stay multiple years on the island hunting sea otters, often clashing with the local Aleut population. After the initial wave of traders, Attu was largely overlooked by ships heading further east. 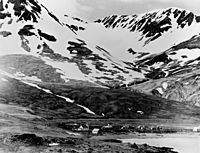 The Aleuts were the primary inhabitants of the island prior to World War II. But, on June 7, 1942, six months after the USA joined the war, the 301st Independent Infantry Battalion of the Japanese Northern Army landed on the island, without opposition, one day after landing on nearby Kiska. Earlier, in response to Japanese aggression in the Pacific, American territorial authorities conducted a mandatory evacuation of about 880 Aleuts from villages elsewhere in the Aleutian Islands. These people were interned in civilian camps in the Alaska Panhandle, where about 75 of them died of various infectious diseases over two years.

However, Attu Village had not yet been evacuated when the Japanese attacked. At the time, Attu’s population consisted of 45 native Aleuts and two other Americans, Charles Foster Jones, 60, a radio technician, originally from St. Paris, Ohio and his wife Etta, a schoolteacher, originally from Vineland, New Jersey. The village consisted of several houses around Chichagof Harbor. The 42 Attu inhabitants who survived the Japanese invasion were taken to a prison camp near Otaru, Hokkaidō. Sixteen of them died while they were imprisoned.

Before the Attu villagers were returned to the U.S., the American government stated publicly that it was not aware of their status.

According to Gen. Kiichiro Higuchi, the Commander of the Japanese Northern Army, the invasion of Kiska and Attu was part of a threefold objective:

In late September 1942, the Japanese garrison on Attu was transferred to Kiska, and then Attu was essentially left unoccupied, but American forces made no attempt to occupy Attu during this time. On October 29, 1942, the Japanese reestablished a base on Attu at Holtz Bay under the command of Lt. Col. Hiroshi Yanekawa. Initially the garrison was about 500 troops, but through reinforcements, that number reached about 2,300 by March 10, 1943. No more reinforcements arrived after that time, owing mainly to the efforts of the U.S. naval force under Rear Admiral Charles "Soc" McMorris, and U.S. Navy submarines. McMorris had been assigned to interdict the Japanese supply and reinforcement convoys. After the sizable naval Battle of the Komandorski Islands, the Japanese abandoned their attempts to resupply its Aleutian garrisons by surface ships. From then on, only submarines were used for the resupply runs. 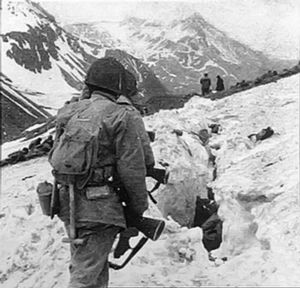 U.S. troops negotiate snow and ice during the battle on Attu in May 1943.

On May 11, 1943, the American operation to recapture Attu began. A shortage of landing craft, unsuitable beaches, and equipment that failed to operate in the appalling weather caused great difficulties in projecting any force against the Japanese. Many soldiers suffered from frostbite – because essential supplies could not be landed, or having been landed, could not be moved to where they were needed. Army vehicles would not work on the tundra. The Japanese defenders under Colonel Yasuyo Yamasaki did not contest the landings, but rather they dug in on high ground away from the shore. This resulted in bloody fighting: there were 3,929 U.S. casualties: 580 were killed, 1,148 were injured, 1,200 had severe cold injuries, 614 succumbed to infectious diseases, and 318 died of miscellaneous causes – largely from Japanese booby traps and from friendly fire. The Japanese were defeated in Massacre Valley. The death count for the Japanese was 2,035. The Americans then built "Navy Town" near Massacre Bay.

On May 29, the last of the Japanese forces suddenly attacked near Massacre Bay in one of the largest banzai charges of the Pacific campaign. The charge, led by Colonel Yamasaki, penetrated U.S. lines far enough to encounter shocked rear-echelon units of the American force. After furious, brutal, close-quarter, and often hand-to-hand combat, the Japanese force was killed almost to the last man: only 28 prisoners were taken, none of them officers. U.S. burial teams counted 2,351 Japanese dead, but it was presumed that hundreds more had been buried by naval, air, and artillery bombardments over the course of the battle.

The other Japanese forces in the Aleutians, after realizing that their position was now vulnerable, evacuated Kiska three months later. 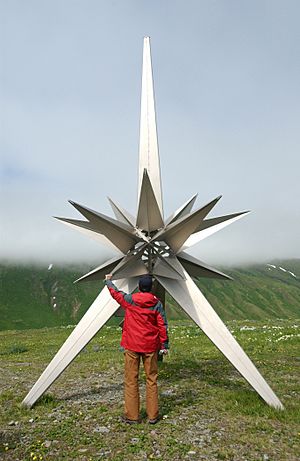 After the war, the survivors of the Otaru prison camp were shipped to other Aleutian islands or to the mainland of Alaska, as there were not enough survivors to sustain their old village at Attu. The United States government decided to construct a LORAN station on the southern tip of Attu, at Theodore Point. This installation was manned by a crew of about twenty members of the United States Coast Guard. The equipment to build the station came out of Holtz Bay and was ferried on barges and landing craft to Baxter Cove, about one mile east of the station. Bulldozers were used to cut a road from Baxter Cove to Theodore Point.

The battlefield area and subsequent military sites were declared a National Historic Landmark in 1985.

In 1987, with the approval of the U.S. Department of the Interior, the government of Japan placed a monument on Engineer Hill, site of the hand-to-hand finale of the battle against the Japanese. An inscription, in Japanese and English, reads: "In memory of all those who sacrificed their lives in the islands and seas of the North Pacific during World War II and in dedication to world peace."

In July 2007, the boots and foot bones of a Japanese soldier were found on the island, and on May 23, 2008, the remains of two more Japanese soldiers were discovered by U.S. Coast Guard Petty Officer 3rd Class Richard Brahm, a public affairs specialist who was a documentarian for the remains recovery team. More remains were located at the burial site, but were left untouched with plans to return at a later time and have them exhumed properly.

Veteran Bill Jones, along with fellow Attu survivor Andy Petrus, were featured in the 2006 documentary film Red White Black & Blue. It is directed by Tom Putnam, and debuted at the 2006 Locarno International Film Festival in Locarno, Switzerland on August 4, 2006.

On August 1, 2010, the United States Coast Guard LORAN station on Attu permanently ceased operation. On August 27, 2010, the station was decommissioned and the Coast Guard personnel left, leaving the island with no resident population.

On June 7, 2012, the 70th anniversary of the Japanese invasion, Senator Lisa Murkowski and United States Coast Guard Rear Admiral Thomas Ostebo dedicated a memorial to Attu Village, its residents who died in Japanese captivity, and the survivors who were unable to return.

The weather on Attu is typical Aleutian weather: cloudy, rainy, and foggy. High winds occur occasionally. Five or six days a week are likely to be rainy, and there are only about eight or ten clear days a year. The rest of the time, even if rain is not falling, fog of varying density is the rule rather than the exception. There are 39–49 inches (990–1,240 mm) of annual rainfall and other precipitation, with the heaviest rains in the autumn and early winter. According to the Köppen climate classification system, Attu has a subpolar oceanic climate (Cfc) with effects similar to tundra climates. For its latitude the climate is exceptionally chilly, with temperatures averaging mid-50's in summer.

Attu was an important location in the world of competitive birding, whose goal is to see and/or hear the largest possible number of bird species within a specific geographic area during a specific time period. Because it is so physically remote from other parts of North America, there are a number of bird species likely to be found on Attu that are not seen anywhere else on the continent. John Fitchen called the island, "the Holy Grail of North American birding".

During his record-setting year of 1998, Sandy Komito spent 4 weeks on the island. Since the closure of Attu Station by the U.S. Coast Guard in 2010, access to the island by birders has been greatly restricted. In a 2010 interview on the subject, Al Levantin (one of Komito's competitors during the 1998 season) singled out inaccessibility of Attu as the factor that would make it nearly impossible to break Komito's record. However, Neil Hayward did break the record, by one species, in 2013 without visiting Attu.

All content from Kiddle encyclopedia articles (including the article images and facts) can be freely used under Attribution-ShareAlike license, unless stated otherwise. Cite this article:
Attu Island Facts for Kids. Kiddle Encyclopedia.