Kiska (Aleut: Qisxa, Russian: Кыска) is an island in the Rat Islands group of the Aleutian Islands of Alaska. It is about 22 miles (35 km) long and varies in width from 1.5 to 6 miles (2.4 to 9.7 km). It is part of Aleutian Islands Wilderness and as such, special permissions are required to visit it. The island has no permanent population.

In 1741 while returning from his second voyage at sea during the Great Northern Expedition, Danish-born Russian explorer Vitus Bering made the first European discovery of most of the Aleutian Islands, including Kiska. Georg Wilhelm Steller, a naturalist-physician aboard Bering's ship, wrote:

On 25 October 1741 we had very clear weather and sunshine, but even so it hailed at various times in the afternoon. We were surprised in the morning to discover a large tall island at 51° to the north of us.

Prior to European contact, Kiska Island had been densely populated by native peoples for thousands of years.

Kiska, and the other Rat Islands, were reached by independent Russian traders in the 1750s. After the initial exploitation of the sea otter population, Russians rarely visited the island as interest shifted further east. Years would frequently pass without a single ship landing.

In 1867, U.S. Secretary of State William H. Seward negotiated the purchase of Alaska with the Russian Empire. Kiska was included in the purchase. 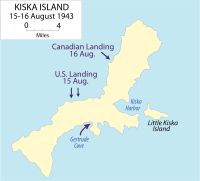 The Japanese No. 3 Special Landing Party and 500 marines went ashore at Kiska on June 6, 1942 as a separate campaign concurrent with the Japanese plan for the Battle of Midway. The Japanese captured the sole inhabitants of the island: a small U.S. Navy Weather Detachment consisting of ten men, including a lieutenant, along with their dog. (One member of the detachment escaped for 50 days. Starving, thin, and extremely cold, he eventually surrendered to the Japanese.) The next day the Japanese captured Attu Island.

The military importance of this frozen, difficult-to-supply island was questionable, but the psychological impact upon the Americans of losing U.S. territory was tangible. During the winter of 1942–43, the Japanese reinforced and fortified the islands—not necessarily to prepare for an island-hopping operation across the Aleutians, but to prevent a U.S. operation across the Kuril Islands. The U.S. Navy began operations to deny Kiska supply which would lead to the Battle of the Komandorski Islands. During October 1942, American forces undertook seven bombing missions over Kiska, though two were aborted due to inclement weather. Following the winter, Attu was liberated and Kiska was bombed once more for over two months, before a larger American force was allocated to defeat the expected Japanese garrison of 5,200 men.

On August 15, 1943, an invasion force consisting of 34,426 Allied troops, including elements of the 7th Infantry Division, 4th Infantry Regiment, 87th Mountain Infantry Regiment, 5,300 Canadians (mainly the 13th Canadian Infantry Brigade from the 6th Infantry Division, with supporting units including two artillery units from the 7th Infantry Division), 95 ships (including three battleships and a heavy cruiser), and 168 aircraft landed on Kiska, only to find the island completely abandoned. The Japanese, aware of the loss of Attu and the impending arrival of the larger Allied force, had successfully removed their troops on July 28 under the cover of severe fog, without the Allies noticing. Allied casualties during this invasion nevertheless numbered close to 200, all either from friendly fire, booby traps set out by the Japanese to inflict damage on the invading allied forces, or weather-related disease. As a result of the brief engagement between U.S. and Canadian forces, there were 28 American dead as well as four Canadian dead, with an additional 130 casualties from trench foot alone. The destroyer USS Abner Read hit a mine, resulting in 87 casualties.

That night, however, the Imperial Japanese Navy warships, thinking they were engaged by Americans, shelled and attempted to torpedo the island of Little Kiska and the Japanese soldiers waiting to embark. Admiral Ernest King reported to the secretary of the Navy, Frank Knox, that the only things that remained on the island were dogs and fresh brewed coffee. Knox asked for an explanation and King responded, "The Japanese are very clever. Their dogs can brew coffee."

The Japanese occupation site on the island is now considered a National Historic Landmark (the highest level of recognition accorded to historic sites in the US) and is protected under federal law. The island is also a part of the Alaska Maritime National Wildlife Refuge (AMNWR) and contains the largest colony of least auklets (over 1,160,000 birds) and crested auklets. Research biologists from Memorial University of Newfoundland have been studying the impact of introduced Norway rats on the seabirds of Kiska since 2001.

Much of the aftermath left behind from World War II is still evident in Kiska. The slow erosion processes on the tundra have had little effect on the bomb craters still visible both from the ground and in satellite images on the hills surrounding the harbor. Numerous equipment dumps, tunnels (some concrete-lined), Japanese gun emplacements, shipwrecks, and other war relics can be found all untouched since 1943.

In 1983, a memorial plaque was placed on Kiska by the 87th Mountain Infantry Regiment. The plaque's inscription reads:

Renamed "Skira", the island was used as the setting for the Codemasters video game Operation Flashpoint: Dragon Rising. The fictionalized version of the island is relocated closer to Russia and China, but the island's topography is replicated near-exactly, with elements of the game designed around it, instead of vice versa. 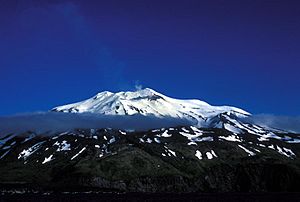 On January 24, 1962, an explosive eruption occurred, accompanied by lava extrusion and the construction of a cinder cone about 98 feet (30 m) high at Sirius Point on the north flank of Kiska Volcano, 1.9 miles (3.1 km) from the summit of the main cone (Anchorage Daily News, January 30, 1962). A second eruption that produced a lava flow was reported to have occurred on March 18, 1964 (Bulletin of Volcanic Eruptions, 1964).

Since then the volcano has emitted steam and ash plumes as well as smaller lava flows.

All content from Kiddle encyclopedia articles (including the article images and facts) can be freely used under Attribution-ShareAlike license, unless stated otherwise. Cite this article:
Kiska Facts for Kids. Kiddle Encyclopedia.